The Making of a Modern Elder 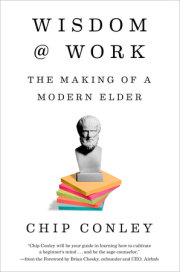 Experience is making a comeback.

New York Times bestselling author Chip Conley teaches us how to repurpose our wisdom to launch new chapters in our careers.
Foreword by Airbnb’s Brian Chesky

“You don’t have to be on the other side of fifty to find this book relevant. The age at which we’re feeling self-consciously ‘old’ is creeping into some people’s thirties, with power cascading to the young in so many companies,” writes New York Times bestselling author Chip Conley in WISDOM@WORK: THE MAKING OF A MODERN ELDER (Currency; $27.00; On Sale September 18, 2018). With this new book, Conley is igniting a bold and urgent conversation about age in the workplace. Conley, a boutique hotel pioneer, served as head of Global Hospitality and Strategy (now strategic adviser) at Airbnb for four years, helping the start-up grow into the largest hospitality brand in the world as he helped steer the rocket ship with its three millennial founders. And what he found was that boomers and millennials have a lot to offer, and can learn from one another. With a foreword by CEO Brian Chesky, WISDOM@WORK reveals how to repurpose a lifetime of experience and wisdom to stay not just relevant but indispensable in the second, third, or fourth act of our careers.

In 2010, at the bottom of the Great Recession, Chip Conley sold the hospitality company that he founded at age twenty-six and grew, over the course of twenty-four years as CEO, into the second largest boutique hotel brand in the United States. Just on the other side of fifty, and nowhere near ready to retire, Conley felt adrift; he was still full of energy and ambition but didn’t know quite what to do with it.

Just two years later, Conley received a call from a young entrepreneur named Brian Chesky, who had founded a home-sharing start-up called Airbnb. Would Conley come onboard and help Chesky and his millennial cofounders turn their scrappy start-up into a global hospitality giant? Conley certainly had the industry experience. And, yet, the digital world in which he suddenly found himself was a total mystery. He didn’t write code. He didn’t have an Uber or Lyft app on his phone. He was also twice the age of the average Airbnb employee and reporting to a CEO young enough to be his son. But Chesky realized that the fifty-three-year-old Conley was just what the company needed—a veteran hospitality guru who had once been an industry disruptor himself, who could institute quality control and instill leadership strategies still alien to the young company where the average manager was merely twenty-eight. Conley came onboard and a wonderful intergenerational partnership was born.

On one hand, Conley was there to advise and mentor these twenty-somethings. But at the same time, he felt very much a student and mentee. What emerged are the secrets to thriving as a midcareer worker in today’s world. In WISDOM@WORK, Conley shares these lessons and more, offering a playbook on how to marry wisdom and experience with curiosity, a beginner’s mind, and a willingness to evolve—all hallmarks of what he calls the “Modern Elder.”

In our increasingly accelerated world that venerates the young, many in midcareer sense that the ground is shifting beneath their feet, leaving them feeling invisible, undervalued, and threatened by the digital natives nipping at their heels. But Conley argues that experience is on the brink of a comeback. He tackles the hard truth that ageism is as big an issue in the working world as any other bias. In the process, Conley liberates the term “elder” from the stigma of “elderly” and ignites a conversation for society to embrace age like any other diversity while also celebrating the value of wisdom and experience.

The fact is, “Modern Elders” possess a set of invaluable skills—high emotional intelligence, good judgment born out of decades of experience, specialized knowledge, and a vast network of contacts—the very skills that will matter most to organizations of the future. Because at a time when power is shifting to the young, companies are finally waking up to the value of the humility, emotional intelligence, and wisdom that come with years on the planet. Whether you’ve been forced to make a mid-career change, are choosing to work past retirement age, or are looking to connect more meaningfully with the bright millennials rising up the ranks, WISDOM@WORK will help you on your path toward growing whole, not old.

Conley can discuss, among other topics:

Bestselling author and hospitality entrepreneur Chip Conley is Strategic Advisor at Airbnb. At age 26, he founded Joie de Vivre Hospitality and turned it into the second largest boutique hotel brand in the world. After selling his company in 2010, he joined Airbnb, and as head of Global Hospitality and Strategy, helped turn it into the world’s largest hospitality brand. Conley has received hospitality’s highest honor, the Pioneer Award. He serves on the boards of the Burning Man Project and the Esalen Institute and is the author of Peak and the New York Times bestseller Emotional Equations. He holds a BA and MBA from Stanford University.