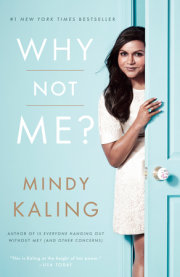 From the author of national bestseller Is Everyone Hanging Out Without Me? and creator and star of The Mindy Project, comes Mindy Kaling’s eagerly awaited second collection of hilarious essays, opinions, concerns, and advice.

“Funny, thoughtful essays and anecdotes written in the star’s trademark voice. But this time around, things are just little more grown-up…This is Kaling at the height of her power.”

Since the publication of her beloved and bestselling first book, Is Everyone Hanging Out Without Me? Mindy Kaling’s life has changed significantly. Back then, she played Kelly Kapoor, a supporting character on the popular series The Office. Now Mindy is the creator, producer, writer, and star of her own TV show, The Mindy Project.  She’s graced magazine covers, appears on the red carpet and is, as she puts it, “a tiny bit famous.” And she’s gone through some other major changes as well—she’s watched friends get married and start their families, and she’s struggled with her own balance of work and private life.  In her bestselling book, WHY NOT ME? (Three Rivers Press; $16.00; on sale 9/27/2016), now available in trade paperback, Mindy turns the anxieties, the glamour, the heartache, and the celebrations of her second coming of age into a laugh-out-loud-funny collection of essays that anyone who’s ever been at a turning point in their life or career can relate to.

While Mindy’s first book focused on the insecurities of her youth, WHY NOT ME? brings to light the even more profound concerns of being a single thirty-something—and the joy of not caring what people say about your outfits.  In this witty, wise, and wickedly funny memoir, Mindy delivers an up-close-and-personal tour of her life. Topics include:

By turns humble, hilarious, and deeply personal, WHY NOT ME? is a refreshing take on modern life—from the fast lane to the drive-thru lane, and every tantalizing turning point in between.