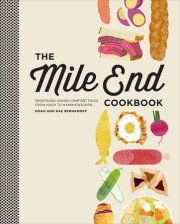 When Noah and Rae Bernamoff opened Mile End Delicatessen in Brooklyn, NY, in January 2010, they had a very specific mission: to spread the gospel of good deli and share the classic Jewish comfort food of their childhood.

With their grandmothers’ recipes as inspiration, Noah and Rae updated traditional dishes and elevated them by using fresh ingredients and from-scratch cooking techniques. THE MILE END COOKBOOK: Redefining Jewish Comfort Food from Hash to Hamantaschen (Clarkson Potter/Publishers; on sale September 4, 2012) is a comprehensive guide to the art of new Jewish cooking with more than 100 recipes and gorgeous photographs

Together in THE MILE END COOKBOOK, Noah and Rae share warm memories of cooking with their families and the traditions and holidays that spurred recipes like blintzes with seasonal fruit compote; veal schnitzel kicked up with pickled green tomatoes and preserved lemons; tsimis that is never mushy; and cinnamon buns made with challah dough.

For every occasion, mood, and meal, these are recipes that any home cook can make, including:

With tips and lore from Jewish and culinary mavens, such as Joan Nathan and Niki Russ Federman of Russ & Daughters, plus holiday menus, Jewish cooking has never been so inspiring.