THE TUNNELS by Greg Mitchell 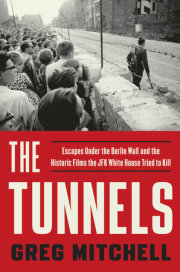 The Tunnels: Escapes Under the Berlin Wall and the Historic Films the JFK White House Tried to Kill

Acclaim for THE TUNNELS:

“The greatest strength of The Tunnels is in the details…Days after finishing the book I could not escape one of Mitchell’s images–of a hat with a small hole in it landing softly on the Western side of the border while its owner’s dead body fell back into the East, waiting for the guards to hurry it out of sight. For those who see walls as the answer to policy problems, this book serves as a stark reminder that barriers can never cut people off entirely but only succeed in driving them underground.”
—The New York Times Book Review

“Engaging…the book vividly describes the harrowing conditions under which strong young men based in West Berlin dug the tunnels…Mitchell’s interviews with the tunnelers, couriers and escapees put a human face on this dramatic experience…These are heart-racing tales, and Mitchell — author of several books on U.S. politics and history — narrates them with emotion and evocative detail…. The political and media angles in “The Tunnels” are indeed intriguing…The intense drama and risks involved for the tunnelers and the escapees offer a compelling context for today’s refu­gee crisis.”
—HOPE M. HARRISON, Washington Post

“Fascinating and deeply researched…Mitchell’s book provides a welcome reminder of the ingenuity and courage that people can display when politics and walls separate them from loved ones and a better life.”
—Christian Science Monitor

“A story with so much inherent drama it sounds far-fetched even for a Hollywood thriller…Mitchell tells a kaleidoscopic cold war story from 1962, recreating a world seemingly on the edge of a third world war. ”
—The Guardian

“Shows the trade-off behind the scenes at one of the most pivotal moments in the standoff between the United States and the Soviet Union…A fascinating and complex picture of the interplay between politics and media in the Cold War era.”
—STEPHANIE KIRCHNER, Washington Post

One of the most sensational episodes of the Cold War occurred where almost no one could witness it: underneath the Berlin Wall. However, as Greg Mitchell reveals in his riveting narrative, that didn’t mean no one was watching. In THE TUNNELS: Escapes Under the Berlin Wall and the Historic Films the JFK White House Tried to Kill (Crown; October 18, 2016), Mitchell chronicles two harrowing attempts to rescue East Germans via tunnels below the Berlin Wall, the U.S. television networks that financed and filmed them, and the Kennedy administration’s attempt to suppress both films. Drawing on a trove of recently declassified documents from the CIA and State Department, the Stasi archives, and the JFK Library, and dozens of interviews with many of the key players, award-winning author Mitchell offers a new reckoning with the haunting legacy of the Berlin Wall.

In the summer of 1962, one year after the rise of the Wall, a group of young West Germans came up with a plan. They would risk imprisonment, Stasi torture, and even death in order to liberate friends, lovers, and strangers in East Berlin by digging tunnels under the Wall. Among the conspirators were a legendary cyclist, an American student from Stanford, and an engineer who would later help build the tunnel under the English Channel. When two U.S. television networks, NBC and CBS, heard about the secret projects, they raced to be first to document the efforts from the inside. The networks funded two separate tunnels in return for exclusive rights to film the escapes, planning spectacular prime-time specials in the golden age of television documentaries. President John F. Kennedy and Secretary of State Dean Rusk were wary of anything that might spark a military confrontation with the Soviets, however, and in accordance with his 1961 claim that “A wall is better than a war,” JFK backed unprecedented maneuvers to quash both documentaries, testing the limits of a free press in a gamble against escalating nuclear tensions.

As the story unfolds week by week, sometimes hour by hour, we meet extraordinary characters: the tunneler who had already served four years in the East German gulag; the Stasi informer who betrays the “CBS tunnel”; and the young East Berliner who escapes with her baby, then marries one of the tunnelers. Their astounding triumphs and trials have never reached an American audience. Today, amid a refugee crisis as a new “Cold War” looms, and debate continues over other standing barriers—from those in the West Bank to a proposed wall at the U.S.-Mexico border—Mitchell’s portrait of the politics of compromise and the subversive power of individuals in dire circumstances will resonate widely.

Film rights to THE TUNNELS have been optioned by FilmNation, with Paul Greengrass (The Bourne Identity, Captain Philips) attached to direct. A propulsive read full of indelible characters and high-stakes intrigue, THE TUNNELS tells one of the great untold stories of the Cold War. As bestselling author Frederick Forsyth judges: “Fascinating—and it is all true.”

GREG MITCHELL is the author of nearly a dozen books, including Tricky Dick and the Pink Lady (a New York Times Notable Book); The Campaign of the Century (winner of the Goldsmith Book Prize, hailed by Christopher Hitchens as “enthralling”); and, with Robert Jay Lifton, Hiroshima in America (“Devastating and persuasive” —Los Angeles Times). He blogs actively about media and politics, has produced several acclaimed film documentaries, and has won numerous awards as the editor of Editor & Publisher.