An Old Man, a Young Man, and Life’s Greatest Lesson 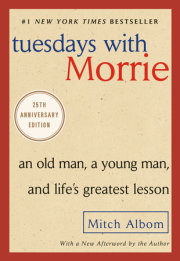 In 1995, Mitch Albom would see an interview that would change not only his life, but the lives of millions around the world. It was Ted Koppel’s Nightline conversation with Morris “Morrie” Schwartz, Albom’s favorite and beloved college professor. Morrie had been diagnosed with ALS and was spending his final months talking with others about what it meant to be dying. Moved by the interview, and feeling guilty that he had lost touch for all those years, Albom went to visit his old teacher. That turned into another visit, and another, and every Tuesday Morrie had left in his life. Their wise and loving conversations became the basis for TUESDAYS WITH MORRIE.

Albom wrote the small book only to pay Morrie’s medical bills. TUESDAYS WITH MORRIE was published in 1997 with a small initial print run, but the response was overwhelming. Its message of inspiration resounded with readers, launching the memoir to the #1 spot on numerous bestseller lists, where it would remain for years. TUESDAYS WITH MORRIE would be adapted by Oprah Winfrey into an Emmy-winning TV movie (starring Hank Azaria and Jack Lemmon, in one of his final performances), as well as a stage play that has seen hundreds of productions around the world. The book, published in 41 languages, is now a staple in classrooms, universities, and homes.

On March 28, 2017, Broadway Books will publish a special 20th Anniversary Edition to commemorate this remarkable milestone. This special edition will include a new afterword from Albom, reflecting back on his relationship with Morrie and the incredible impact the book has had since its original publication.

With over 15 million copies sold to-date worldwide, TUESDAYS WITH MORRIE is a true publishing phenomenon. Its enduring success proves that this story is not only touching, but timeless, and with the 20th Anniversary Edition, Albom will share Morrie’s lesson—and two decades of perspective—with a whole new generation of readers.

Mitch Albom is an internationally renowned author, screenwriter, playwright, nationally syndicated columnist, broadcaster, and musician. He is the author of six consecutive #1 New York Times bestsellers and his books have collectively sold more than 35 million copies in 45 languages. Four of his books have been made into Emmy Award–winning and critically acclaimed television movies. He has founded eight charities in Detroit and Haiti, where he operates an orphanage. He lives with his wife, Janine, in Michigan.