Recipes from my head to your plate 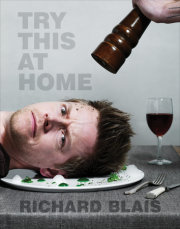 Try This at Home

As fans of Top Chef know, Richard Blais’s food is creative and surprising, but more than anything, it’s delicious. In TRY THIS AT HOME: Recipes from My Head to Your Plate, his first cookbook, Richard reveals a simplified approach to adventurous cooking by sharing new flavor combinations and textures to reinvent home cooks’ classic dishes.

To Richard the most thrilling aspect of cooking is making people happy. In TRY THIS AT HOME he shares 125 delicious and interesting recipes that are full of surprise and flavor and are sure to please any table of diners. Each recipe is straightforward enough to make at home, but for those who want to try using liquid nitrogen or a sous vide machine, he offers fun variations to his recipes that add another level of excitement in the kitchen.

For home cooks thrilled by the idea of putting a creative twist on classic meals, TRY THIS AT HOME is the accessible and fun debut cookbook from Bravo’s Top Chef All-Stars winner Richard Blais, featuring the signature recipes, flavor combinations, and cooking techniques that have made him the celebrated and popular chef he is today.