TRUMP AND ME by Mark Singer 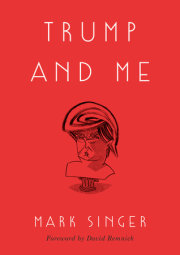 Mark Singer’s brilliantly rendered TRUMP AND ME (Tim Duggan Books; July 5, 2016) is a masterful, entertaining, and deeply insightful portrait of Donald Trump, newly updated, from his most observant longtime chronicler.

Ever since Donald Trump entered the presidential race—in a press conference attended by paid actors, in which he slandered Mexican immigrants—he has dominated headlines, becoming the unrestrained id at the center of one of the most bizarre and alarming elections in American history.

It was not always so. Twenty years ago, longtime New Yorker writer Mark Singer was conscripted by his editor to profile Donald Trump. At that time, Trump was a mere Manhattan-centric megalomaniac, a failing casino operator mired in his second divorce and (he claimed) recovering from the bankruptcy proceedings that prompted him to inventory the contents of his Trump Tower home. Conversing with Trump in his offices, apartments, cars, and private plane, Singer found himself fascinated with this man “who had aspired to and achieved the ultimate luxury, an existence unmolested by the rumbling of a soul.”

In TRUMP AND ME, Singer revisits the profile and recounts how its publication lodged inside its subject’s head as an enduring irritant—and how Singer (“A TOTAL LOSER!” according to Trump) cheerfully continued to bait him. He reflects on Trump’s evolution from swaggering buffoon to potential threat to America’s standing as a rational guardian of the world order. Heedlessly combative, equally adept at spewing insults and manipulating crowds at his campaign rallies, the self-proclaimed billionaire has emerged as an unlikely tribune of populist rage. All politics is artifice, and Singer marvels at how Trump has transfixed an electorate with his ultimate feat of performance art—a mass political movement only loosely tethered to reality.

TRUMP AND ME is an amusing, cogent, deeply reported, and psychologically astute portrait. As light-hearted as it is critical, it provides readers seeking insight into the unlikely Republican front-runner with that and more.

About the Author: Mark Singer has been a staff writer at The New Yorker since 1974. He is the author of Funny Money and Somewhere in America. He lives in New York City.