A Story of Redemption, Compassion, and a Mission to Bring Clean Water to the World 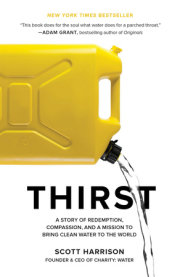 100% of the author’s net proceeds from THIRST will fund charity: water projects around the world

“If you’ve ever dreamed of changing careers or changing the world, read this book.”

“Thirst is a story about all of us. In sharing his own remarkable journey, Scott shows us how to find the extraordinary in the ordinary, how to find hope in despair, and how simple acts of generosity can transform everything from what we believe about ourselves to how we connect with each other.

In the end, Thirst is about what matters most. Love.”

Scott Harrison has helped to improve the lives of 8.5 million people—and yet his inspiring story begins with drugs, alcohol, gambling, debt and everything in between. In THIRST: A Story of Redemption, Compassion, and a Mission to Bring Clean Water to the World (Currency, Hardcover, October 2, 2018, $27.00), Harrison shares his unbelievable journey and reveals how his fledgling operation grew into a world-renowned organization that has disrupted the traditional philanthropy model and inspired a new breed of social entrepreneur. It’s a riveting account of how to build a better charity, a better business, a better life—and a gritty tale that proves it’s never too late to make a change, no matter how dramatic your course correction.

Harrison is the founder and CEO of charity: water, a nonprofit organization bringing clean and safe drinking water to people in developing countries. The largest water-focused nonprofit in the United States, charity: water has funded nearly 30,000 water projects serving 8.5 million people in 26 countries. It has been name-checked by President Obama; garnered support from the founders of Facebook, Twitter, and Spotify; and Bill Gates has called charity: water an “innovative and transparent organization making a huge impact.” Harrison has been recognized on Fortune’s 40 Under 40 list, Forbes’s Impact 30 list, and Fast Company’s 100 Most Creative People in Business.

In the last 12 years, charity: water has galvanized more than 2 million social media followers and originated a social-fundraising website model that’s raised $300 million from over 1 million donors, channeling 100% of all public donations toward water project costs. And yet, as Harrison describes with great vulnerability in THIRST, his life—and company—easily could have gone a different way.

Harrison grew up in New Jersey, an only child in a conservative Christian family. When he was four, his mother suffered from an accidental carbon monoxide poisoning that damaged her immune system, forcing her to spend her days in isolation and her nights in a tinfoil-covered safe room. Harrison became his mother’s dutiful caretaker. But at 19, he completely rebelled, moved to New York City, and plunged headfirst into nightlife.

“You don’t just leave nightlife and become a successful doctor or lawyer or banker. I felt trapped,” Harrison writes in THIRST. “So every night, I’d snort another line of cocaine and pass the rolled-up bill to another pretty girl and think to myself, This is not who I am. This is not who I want to be. This is not how I thought my life would turn out.”

After a dangerous run-in with a gun-toting bouncer, Harrison gave up nightlife and vowed to make a 180-degree turn, spending a year in service to others. At first, he was turned down by every charity he applied to. But then he got a surprise call from Mercy Ships, a floating hospital clinic, which sent him on a photojournalist assignment in West Africa. The experience changed his life, and ultimately, the lives of millions of others.

During his two Mercy Ships tours, Harrison came to discover the global dirty-water crisis. At the time, over 1 billion people lacked access to clean water and were forced to drink from rivers, swamps, and mud puddles filled with parasites and bacteria. The result: half a million deaths a year from cholera, dysentery, typhoid, and other diseases; 4,500 children dying daily; and severely diminished quality of life for the women and girls who spent hours every day walking to collect filthy water.

In 2006, Harrison launched charity: water the best way he knew how—he threw a party in New York City. It was his 31st birthday, but instead of gifts, he asked friends to give a $20 donation at the door. With the help of celebrities like Mark Ruffalo and Joaquin Phoenix, they raised $15,000 in one night and funded charity: water’s first projects, six desperately needed wells at a refugee camp in Uganda.

In THIRST, Harrison recounts the twists and turns that built charity: water into one of the most admired nonprofits in the world. Knowing that one in three Americans say they have no confidence in charities, Harrison vowed to earn back the public’s trust by hewing to a 100% model—meaning every single dollar from the public goes toward building water projects in the field. The 100% model almost tanked his fledging charity. But with Harrison leading the charge, and through charity: water’s dedication to “action, not words,” its bold transparency in showing donors exactly where and how their money is spent, and its imaginative branding and storytelling, they have disrupted how social entrepreneurs work, inspired millions of people everywhere to give selflessly, and helped reestablish the public’s trust in charity.

THIRST is full of riveting stories, fascinating characters, and uplifting messages, including:

SCOTT HARRISON is the founder and CEO of charity: water, a non-profit that has mobilized over one million donors around the world to fund nearly 30,000 water projects in 26 countries that will serve more than 8.5 million people. Harrison has been recognized on Fortune’s 40 under 40 list, Forbes’ Impact 30 list, and was ranked #10 in Fast Company’s 100 Most Creative People in Business. He is currently a World Economic Forum Young Global Leader and lives in New York City with his wife and two children.