The Great American Slow Cooker Book: 500 Easy Recipes for Every Day and Every Size Machine 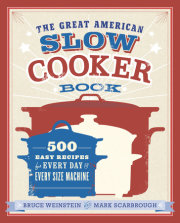 The Great American Slow Cooker Book: 500 Easy Recipes for Every Day and Every Size Machine (Clarkson Potter/Publishers; on sale January 7, 2014; $25.00), Bruce Weinstein and Mark Scarbrough’s groundbreaking twenty second cookbook, is the only book you will ever need to master your slow cooker.

Here’s the problem they’ve solved: all slow cooker recipes are written for just one size of machine. A recipe calls for a 4-quart but you’ve got an 8-quart behemoth on the shelf. Or it calls for a 7-quart and there’s just the two of you with your slimmed-down 2½-quart model. In any given book or article, up to three-quarters of the recipes are not developed for your machine.

The Great American Slow Cooker Book adjusts the proportions of every recipe to fit every model. Pot roast with figs and pearl onions for two? It’s here. Spicy chicken thighs with plantains for a crowd? Yep. Thanks to an innovative format, there’s finally a slow cooker book with recipes for every machine. And it’s not just math. Double the broth in a 4-quart recipe and you’ll swamp your 8-quart machine. Halve the spices from a 6-quart recipe and you’ll end up with a tasteless stew in your 3-quart model. Bruce and Mark have crafted each recipe in every size: a monumental effort that has paid off!

Each of their 500 recipes includes ingredient proportions for 2- to 3-quart, 4- to 5-quart, and 6- to 8-quart machines, guaranteeing a perfect fit no matter what machine you own. Each recipe is labeled for its level of difficulty, its cook time, and even how long it’ll stay great on the keep-warm setting. The range of recipes covers every kind of dish imaginable: breakfast oatmeals, slow-braised meats, succulent vegetables, sweet jams, savory sauces, and decadent desserts. Sample recipes include:

Bruce and Mark decode this no-fuss appliance and explain what the slow cooker can do (keep in moisture and amplify certain flavors) and what it can’t do (brown or crisp raw ingredients), preventing problems and proposing plenty of creative—and tasty—solutions.

The Great American Slow Cooker Book’s 500 recipes run from sophisticated to homey, international to accessible, vegetarian-friendly to carnivore-ready. Home cooks are destined to return to this definitive guide again and again, marveling at how so much flavor can come out of one machine.

BRUCE WEINSTEIN and MARK SCARBROUGH are the creators of the bestselling Ultimate Cookbook series (on subjects as diverse as pizza, ham, candy, shrimp, and peanut butter) and have most recently published Goat: Meat, Milk, Cheese and Grain Mains. They were nominated for a James Beard Award in 2011, and won the Gourmand Award at the Paris Book Show in 2010 for Cooking Know-How. They are regular contributors to Weight Watchers.com, Cooking Light, and Fine Cooking.