In The Fatal Gift of Beauty, Nina Burleigh presents the most thorough account of the Amanda Knox case

Award-winning journalist delves into the shocking murder of Meredith Kercher 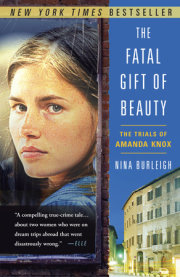 The Fatal Gift of Beauty: The Trials of Amanda Knox

“[In] this powerful example of narrative nonfiction . . . Burleigh, who parses how the Knox trial was perhaps tainted, still presents a fair and unbiased portrait of a girl adrift in a foreign legal system and a culture rife with preconceptions about young American women.”

“Burleigh’s propulsive narrative and the many unsettling aspects of the case make this a standout among recent true-crime titles.”

“Journalist/author Burleigh reconstructs a murder case that has proved to be about much more than murder.”

“The Fatal Gift of Beauty is the real, the true, and the complete story of the Amanda Knox case. It will draw you into a nightmare world of murder, conspiracy, corruption, false accusations, police incompetence, abuse, lies, and manipulations. Nina Burleigh is a first-rate journalist who presents a meticulously researched and reported account, with every fact documented and sourced. It is an essential read for anyone interested in this case. More than a murder story, is a look into the dark and complex soul of Italy itself.”

— Douglas Preston, co-author of The Monster of Florence

“The global media, in its frenzied coverage of the sensational Amanda Knox murder trial, overlooked what Nina Burleigh has skillfully unearthed and analyzed—a compelling chain of evidence, subtle levels of significance. Her telling of the tale is clearly the only one that gets it right.”

—John Berendt, author of The City of Falling Angels and Midnight in the Garden of Good and Evil

“Nina Burleigh has cut through the confusion of conflicting and often inaccurate news accounts of the Amanda Knox murder case and given us a lucid, fair-minded account of the case. She shows, quite convincingly, that Knox and her codefendant have been victims of a serious miscarriage of justice. Perhaps more important, she explains why, showing the case to be the product of cultural misunderstanding betweenItalyand theUnited States.”

—Alexander Stille, author of The Sack of Rome

The half-naked, sexually assaulted, bruised, and bloodied body of twenty-one-year-old British university exchange student Meredith Kercher was found November 2, 2007, the day after Halloween, stabbed, with her throat slashed in an upstairs flat that she shared with three other young women in the idyllic hilltown of Perugia, Italy. The sexually violent murder became an overnight international sensation as the unexpected news broke that Kercher’s roommate, a young, angelic-looking American girl named Amanda Knox, was arrested and charged with the gruesome crime, along with her boyfriend, Raffaele Sollecito, and a troubled local man Knox said she “vaguely” knew, Rudy Guede.

The Fatal Gift of beauty: The Trials of Amanda Knox (Broadway; July 10, 2012) is the most incisive, up-to-date account of this shocking murder. Award-winning investigative journalist Nina Burleigh scrutinizes every aspect of the case, from the machinations of the Italian justice system to the underground depravity and clash of cultures in one of central Italy’s most picturesque cities. Fascinated by the crime from its outset, Burleigh is the only journalist to have relocated her family from the United States to Perugia, living there for nine months and returning again on later trips, determined to seek out the truths of Kercher’s horrific death. While there, Burleigh encountered obstacles: Her phone was placed under surveillance; her computer was hacked; and her movements were watched by the government. Yet she wasn’t deterred, obtaining interviews with those directly involved and implicated in the case, many of whom had never spoken publicly before. Most important, Burleigh corresponded directly with Knox and Sollecito and has the letters to prove it.

THE FATAL GIFT OF BEAUTY stands apart on the subject of Knox due to Burleigh’s extensive access to both the accused and the prosecutors. Burleigh weaves together important information from trial and police records, including the overlooked aspects of the case, the complicated Perugian culture, as well as media coverage and attitudes about Americans abroad that finally explain what really happened the night Kercher was killed. For example, Burleigh illustrates the following: the defense lawyers went to trial without having access to the evidence against their clients; the Perugia authorities insisted that they never taped the interrogations of Knox and Sollecito on November 5–6, even though they surreptitiously taped every conversation they uttered while in jail; police accidentally destroyed three laptops—Sollecito’s, Kercher’s, and Knox’s—before information could be pulled from them; police released incriminating photos to the media without explanation; a police officer who was not a forensics expert, took a knife from Sollecito’s apartment and stored it in different boxes over the course of one week, before ultimately sending it to the crime lab in Rome (besides that knife and Sollecito’s penknife, no other knives were tested—or, if they were, the police never put the results into the record); the judge and jury were never sequestered; the experts tried to make the evidence fit the narrative; Magistrate Giuliano Mignini changed the hour of death from the one given by the medical examiner to better match his own understanding of the facts; and a highly prejudicial animated film of Knox, Sollecito, and Guede killing Kercher was allowed into the courtroom. Burleigh also examines how there was no voir dire—the preselection process for jurors conducted jointly by defense and prosecution—and how the standard of “proof beyond a reasonable doubt” is not adhered to inItaly.

Burleigh also skillfully launches a comprehensive journalistic investigation into the lives and backgrounds of the defendants. Through her research, she creates, for the first time, full character portraits of the three defendants in the case: Sollecito, a computer engineering student at the University of Perugia and a member of an affluent family; Guede, a mysterious Ivory Coast immigrant with a troubled childhood, a habitual home invader, and a criminal; and Knox, or “Foxy Knoxy” as she became known, the twenty-year-old University of Washington language student attending Perugia’s University for Foreigners. Burleigh also introduces us to an extraordinary cast of characters involved in the case, including Carlo Dalla Vedova, Knox’s chief attorney; Magistrate Giuliano Mignini, the morally stern prosecutor overseeing the case; Giacinto Profazio, a Perugia policeman; Giacamo Silenzi, a suave Italian boy who lived below Kercher and Knox; Patrick Lumumba, a local bar owner wrongly accused of the murder; and assorted policewomen, lawyers, and journalists—each with his or her own agenda.

THE FATAL GIFT OF BEAUTY is a thoughtful, compelling examination of an enduring mystery; an ancient, storied place; and a disquieting facet of Italian culture: its obsession with female eroticism. It is also an acute window into the minds and personalities of the accused killers and of the conservative Italian magistrate striving to make sense of an inexplicable act of evil. But at its core, it is an indelible portrait of Amanda Knox, the strangely childlike, enigmatic beauty whose photogenic face became the focal point of international speculation about the dark side of youth and freedom.

ABOUT THE AUTHOR: Nina Burleigh is an award-winning journalist and author of four previous books, including Mirage: Napoleon’s Scientists and the Unveiling of Egypt, which was selected by the New York Times as an Editors’ Choice and winner of the Society of Women Educators’ Award in 2008. She has been a staff writer at Time and People, and her articles have appeared in The New Yorker, the Washington Post, the Chicago Tribune, New York, and The Huffington Post. She lives in New York.