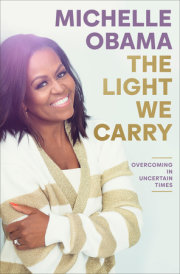 The Light We Carry

THE LIGHT WE CARRY
Overcoming in Uncertain Times
By Michelle Obama

New York, New York (July 21, 2022) — A global publication date of Tuesday, November 15, 2022, has been scheduled for THE LIGHT WE CARRY: Overcoming in Uncertain Times, the new book by Michelle Obama, former First Lady of the United States.

The news was announced today by Markus Dohle, CEO of Penguin Random House, which acquired world publishing rights to the book. Mrs. Obama was represented by Deneen C. Howell of Williams & Connolly LLP. The book cover image was also released and can be accessed in high resolution at this link. Mrs. Obama’s video announcement of the book can be seen here: at this link.

THE LIGHT WE CARRY will be released in the U.S. and Canada in print and digital formats by Crown, an imprint of the Random House Publishing Group, a division of Penguin Random House, with an announced first printing of 2.75 million copies. A Spanish-language edition, titled Con luz propia, will be published by Plaza & Janés/Penguin Random House Grupo Editorial. An unabridged audio edition of the book, read by Mrs. Obama, will be simultaneously released in digital and physical formats by Penguin Random House Audio. The book will be published simultaneously in 14 languages and 27 countries around the world, with additional languages and territories to be announced.

Mrs. Obama’s previous book Becoming, a memoir that chronicles her life journey from her childhood on the South Side of Chicago to her experiences as the first Black First Lady of the United States, has inspired multiple generations of readers worldwide and received widespread critical acclaim. Among other accolades, the book was named a New York Times Notable Book of the Year, USA Today’s #1 Book of the Year, an Oprah Book Club selection, and an NAACP Image Award winner. The audiobook edition, read by the author, received a GRAMMY Award for Best Spoken Word Album. Since its publication on November 13, 2018, Becoming has been translated into 50 languages and sold more than 17 million units across formats worldwide, including nearly 10 million units of the U.S. edition alone.

In THE LIGHT WE CARRY, Mrs. Obama offers readers a series of fresh stories and insightful reflections on change, challenge, and power, including her belief that when we light up for others, we can illuminate the richness and potential of the world around us, discovering deeper truths and new pathways for progress. Drawing from her experiences as a mother, daughter, spouse, friend, and First Lady, she shares the habits and principles she has developed to successfully adapt to change and overcome various obstacles—the earned wisdom that helps her continue to “become.” She details her most valuable practices, like “starting kind,” “going high,” and assembling a “kitchen table” of trusted friends and mentors. With trademark humor, candor, and compassion, she also explores issues connected to race, gender, and visibility, encouraging readers to work through fear, find strength in community, and live with boldness.

“I’ve learned it’s okay to recognize that self-worth comes wrapped in vulnerability, and that what we share as humans on this earth is the impulse to strive for better, always and no matter what,” writes Mrs. Obama in the Introduction to THE LIGHT WE CARRY. “We become bolder in brightness. If you know your light, you know yourself. You know your own story in an honest way. In my experience, this type of self-knowledge builds confidence, which in turn breeds calmness and an ability to maintain perspective, which leads, finally, to being able to connect meaningfully with others—and this to me is the bedrock of all things. One light feeds another. One strong family lends strength to more. One engaged community can ignite those around it. This is the power of the light we carry.”

Said Markus Dohle, “Penguin Random House is honored to partner once again with Michelle Obama and to help bring her powerful storytelling and earned wisdom to readers everywhere. As the world struggles with an unprecedented health pandemic, deep political divisions, social and racial injustice, and anxiety about the future, I am confident that her new book will provide all of us with some urgently needed reassurance while rekindling a spirit of optimism about the power we all hold to positively shape our personal and collective futures.”

In recognition of Mrs. Obama’s long-standing commitment to mentorship and education as well as her inspiring leadership in encouraging young people to discover the power of their own stories, to commemorate the publication of THE LIGHT WE CARRY Penguin Random House is naming in her honor an annual $10,000 “Michelle Obama Award for Memoir” within its signature Creative Writing Awards (CWA) program. Since 1993, the Creative Writing Awards program has awarded more than $2.8 million to public high school students for writing, within five categories: original poetry (the Amanda Gorman Award for Poetry); memoir/personal essay (now the Michelle Obama Award for Memoir); fiction/drama; spoken-word compositions (the Maya Angelou Award for Spoken Word); and the NYC Entrant Award. In partnership with the grassroots nonprofit We Need Diverse Books, the program empowers and celebrates hundreds of young writers each year and underscores Penguin Random House’s commitment to identifying and nurturing new literary talent. More information about the Creative Writing Awards program can be found here: CWA Program

Previously, Penguin Random House donated one million children’s books in the Obama family’s name to First Book, a long-standing Penguin Random House nonprofit partner and the Washington, D.C.–based partner of the 2016 White House digital education initiative. First Book is dedicated to promoting equal access to education by providing new books, learning materials, and other essentials to children in need in the United States and Canada.

The print edition of THE LIGHT WE CARRY will have a suggested list price of $32.50 in the U.S. and $42.00 in Canada. The digital edition will be priced at $16.99 in the U.S. and $18.99 in Canada. Information about the book is available to consumers at www.michelleobamabooks.com.

Promotional plans for THE LIGHT WE CARRY will be announced at a later date. In the meantime, Mrs. Obama recently launched her number on Community, the SMS text messaging platform, which will allow people in the U.S. and Canada to connect with her directly via text at (312) 847-4044.

MICHELLE OBAMA served as First Lady of the United States from 2009 to 2017. A graduate of Princeton University and Harvard Law School, Mrs. Obama started her career as an attorney at the Chicago law firm Sidley & Austin, where she met her future husband, Barack Obama. She later worked in the Chicago mayor’s office, at the University of Chicago, and at the University of Chicago Medical Center. Mrs. Obama also founded the Chicago chapter of Public Allies, an organization that prepares young people for careers in public service. She is the author of the #1 global bestseller Becoming and the #1 national bestseller American Grown. The Obamas currently live in Washington, D.C., and have two daughters, Malia and Sasha.

Crown is an imprint of the Random House Publishing Group, a division of Penguin Random House, the world’s largest trade book publisher, which is dedicated to its mission to ignite a universal passion for reading by creating books for everyone. The company, which employs more than 10,000 people globally, was formed on July 1, 2013, by Bertelsmann and Pearson. As of April 1, 2020, Bertelsmann is full owner of the company. With more than 300 imprints and brands on six continents, Penguin Random House comprises adult and children’s fiction and nonfiction print and digital English-, German-, and Spanish-language trade book publishing businesses in more than 20 countries worldwide. With over 16,000 new titles, and more than 700 million print, audio, and eBooks sold annually, Penguin Random House’s publishing lists include more than 80 Nobel Prize laureates and hundreds of the world’s most widely read authors.