The Innocent by Taylor Stevens

Vanessa Michael Munroe—the captivating heroine of Taylor Stevens’s The Informationist,—returns in THE INNOCENT, an emotionally gripping novel now in paperback 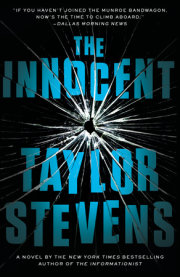 Praise for THE INNOCENT:

“Fans of thrillers who haven’t yet discovered Stevens are in for a treat . . . those who have eagerly awaited this sequel will be delighted to find the same intelligent writing, masterful pacing, and tense and fluid action scenes that feel ready-made for the cinema, and an intensely emotional core that lends Stevens’s novel a depth not often found in the genre.” —Associated Press

“If you haven’t joined the Munroe bandwagon, now’s the time to climb aboard.” —Dallas Morning News

“The best thriller of the year.” —San Francisco Bay Guardian

“The Innocent is tight and fast-paced, an adrenaline rush of a novel . . . . The descriptions of The Chosen’s abuses of its own members are heartwrenching; Stevens’s own experience in such a world makes this semiautobiographical novel’s emotional impact even stronger . . . . A whirlwind thriller.” —Shelf Awareness

When Taylor Stevens’s debut novel, The Informationist, was published in March 2011, reviewers and readers alike were drawn to her taut writing, complex characters, and page-turning plot that blended the exotic with chilling violence. The Informationist became an instant New York Times bestseller and was one of the most talked about debuts of the year.  In THE INNOCENT (Broadway Paperbacks, August 28, 2012), now available in paperback, Stevens’s fearless heroine Vanessa Michael Munroe returns to give readers striking insight into the author’s own shocking past.

Readers quickly fell in love with Munroe in The Informationist, but they were also fascinated by Stevens’s utterly compelling backstory: her childhood and young adult years spent in the Children of God cult. During this time she was denied access to books or television, and relied on her imagination and storytelling abilities as coping mechanisms. Stevens escaped the cult in her twenties, leaving everything behind to start over in the United States, and it was there that she taught herself to write.

In THE INNOCENT, Munroe is back and must use her razor-sharp skills to infiltrate the closed world of The Chosen. Eight years earlier, five-year-old Hannah was spirited away from her parents by the cult. Ever since, members of The Chosen have hidden the child and shielded her abductor. Now, childhood survivors of The Chosen, who have left the cult and live “on the outside,” know where to find Hannah. They turn to Munroe for help, understanding that their only chance of saving an innocent is to put Munroe on the inside.

While Stevens stresses that THE INNOCENT is fiction, as are the characters that populate the story, she has drawn upon her own experiences growing up within the Children of God. According to Stevens, THE INNOCENT, though not specifically the story of her life, is the closest she’ll ever come to writing an autobiography.

In THE INNOCENT, Stevens offers readers a closer look at the characters they fell in love with in The Informationist—Munroe, Miles Bradford, and Logan—transporting the trio to the crowded streets of Morocco and Buenos Aires. Once again Stevens masterfully weaves a thriller that is at once intelligent, suspenseful, and impossible to put down, and her latest will surely leave fans eagerly awaiting the next installment, The Doll, to be published in June.

Taylor Stevens is the New York Times bestselling author of The Informationist. The first novel featuring Vanessa Michael Munroe, it received critical acclaim and has been published in 17 languages. Raised in communes across the globe and denied an education beyond the sixth grade, Stevens broke free of the Children of God and now lives in Texas.  Her third novel in the series, The Doll (Crown Publishers), will be released in June.