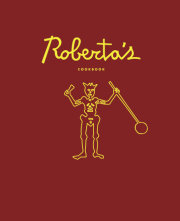 Roberta’s began as a simple idea when three friends decided they’d open their own pizza place. The only agenda was to serve great food and build a place where people would go to have fun. With hardly any money, they made roots in a cinderblock bunker in Bushwick, Brooklyn, where they had the freedom to do whatever they wanted with the space. Friends and family pitched in with demolition and construction, a wood-burning pizza oven made its way by boat from Italy, and doors eventually opened in January 2008. Four hundred people showed up for opening night. Even without heat or water at the restaurant for the first few months, people were lining up.

Today, Roberta’s is a restaurant destination for people from around New York and from around the world. The spirit of Roberta’s will always remain the same, but the restaurant is ever-evolving and growing. As it did when it started, Roberta’s continues to create simple, beautiful food with fresh, seasonal ingredients that speak for themselves.
In ROBERTA’S COOKBOOK (Clarkson Potter/Publisher; October 29, 2013; $35.00), chef Carlo Mirarchi and co-owners Brandon Hoy and Chris Parachini tell the story of how Roberta’s came to be and the food that was made along the way. Readers will get a sense of the graffiti-adorned place and a context for the food and drinks that are served.

Named “one of the most extraordinary restaurants in the country” by the New York Times, Roberta’s is the go-to spot for anyone who wants great food and a fun experience.

CARLO MIRARCHI is a self-taught chef and co-owner of Roberta’s and Blanca, two restaurants in Bushwick, Brooklyn. He was named one of Food & Wine’s Best New Chefs of 2011, and has garnered wide acclaim in the New York Times and Bon Appétit, and at the South Beach Wine & Food Festival, SXSW, and Art Basel. CHRIS PARACHINI and BRANDON HOY are co-founders of Roberta’s and Blanca and helped establish the Brooklyn Grange, New York City’s biggest rooftop farm, and Rippers, a waterfront restaurant in the Rockaways in Queens. KATHERINE WHEELOCK is a writer and editor who has contributed to the Wall Street Journal, GQ, and Details. She works for Roberta’s.