The Expats by Chris Pavone 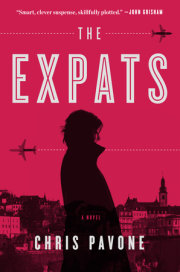 “Refreshingly original. . . . Part Ludlum in the pacing, part Le Carré in the complexity of story and character, but mostly Chris Pavone. . . . You appreciate Pavone for crafting a thriller so good that you wonder what other ideas he has up his cloak, right alongside the obligatory dagger.”
—The Star-Ledger

“Amazing. . . . Skillful and atmospheric. . . . Impossible to put down. . . . Pavone invokes memories of the great writers of spy fiction of the past, and he has the chops to be mentioned with the best of them.”
—Associated Press

“Fans of John le Carre and Robert Ludlum will welcome [this] meticulously plotted, psychologically complex spy thriller. . . . The sheer amount of bombshell plot twists are nothing short of extraordinary, but it’s Pavone’s portrayal of Kate and her quest to find meaning in her charade of an existence that makes this book such a powerful read.”
—Publishers Weekly (starred review)

“Brilliant, insanely clever, and delectably readable, this debut thriller breaks the espionage genre bounds with its American-as-apple-pie heroine. . . . Pavone displays the best characteristics of the form and will earn a faithful and yearning readership.”
—Library Journal (starred review)

“A stunningly assured first novel. . . . An intricate, suspenseful plot that is only resolved in the final pages.  The juxtaposition of marital deceptions and espionage is brilliantly employed. . . .  A must for espionage fans.”
—Booklist (starred review)

“An impressive thriller by first-time novelist Pavone, with almost more double-crosses than a body can stand. . . . An enjoyable thriller with unanticipated twists that will keep readers guessing till the end.”
—Kirkus (starred review)

“A gripping spy drama and an artful study of the sometimes cat-and-mouse game of marriage.”  —Family Circle

“A thoroughly enjoyable thriller with just the right amount of twists. . . . Pavone masterfully layers all the action and deceit, the head games and plot twists, keeping the reader guessing. . . . Highly recommended.”
—Suspense Magazine

“Hard to put down. . . . The Expats is as much a novel about a woman trying to balance a job, a husband and kids as it is a spy thriller. . . . It works. Put it on the spring list.”
—San Francisco Bay Guardian

“A gem. Clever, suspenseful with a jet fueled story that rockets from one corner of the globe to another, it is never less than a thrill a minute. . . . An absolute winner!”
—Christopher Reich

“One of the best-written spy thrillers I’ve ever read. . . . A riveting story of great-game deceptions wrapped inside the smaller deceptions of marriage. At moments horrifying, hilarious, and very wise, The Expats has given Chris Pavone a permanent place on my short list of must-read authors.”
—Olen Steinhauer

“Spy stories need to budge over to make space for Kate Moore—mother, wife, expat and far more than she appears. I loved her.”
—Rosamund Lupton

“Riveting.  One of the most accomplished debuts of recent years.”
—John Connolly

When Chris Pavone moved to Europe with his family after his wife took a new job in Luxembourg, he quickly realized that he was not entirely prepared for the expat life. Having recently left behind a two-decade-long career as a book editor in New York, he suddenly found himself adrift in a sea of stay-at-home moms, a lone dad whose existence was now defined by organizing playdates and attending PTA meetings. As he grappled with an unfamiliar role that called his very identity into question, he found himself wondering about the women who were his newfound peers: Who was that mother on the next playground bench? What was she in her previous life, and what secrets could she be hiding?

Now, in THE EXPATS (Crown Publishers; March 6, 2012), Pavone draws upon his experiences abroad to deliver a fast-paced, riveting, and sophisticated debut novel that has been hailed by critics as “stunningly assured” (Booklist); “brilliant, insanely clever, and delectably readable” (Library Journal); and “[a] meticulously plotted, psychologically complex spy thriller” whose “sheer amount of bombshell plot twists are nothing short of extraordinary” (Publishers Weekly).

Set against a richly atmospheric background of suspense and intrigue, THE EXPATS introduces an indelible and deeply engaging female heroine. At first glance, Kate Moore is an ordinary, American expat mom whose days are filled with coffee outings with friends and the mundane demands of child care. But Kate is also guarding a secret: until recently she’d been leading a double life as a CIA agent, traveling the globe on increasingly dangerous covert missions. After her job drives her to commit an unforgiveable act, Kate is ready for a less eventful life and her husband Dexter’s new job as a financial systems security consultant in Luxembourg provides the perfect exit strategy. But still she remains unable to bring herself to reveal her secret to him.

As Kate struggles to adapt to her new expat existence, always wondering when her past will catch up with her, her spook instincts take over and she grows suspicious of those around her. There’s an overly friendly American couple, Bill and Julia, who clearly are not who they say they are, and whom Kate suspects may be assassins; and Dexter has become withdrawn, evasive, and unhealthily absorbed in his work, which mysteriously leads him to come home with mud-stained shoes. When Kate breaks her vow to never investigate her own husband and begins to dig for the truth, her world quickly unravels as she discovers that Dexter has been harboring an explosive secret of his own—and that he may be involved in a dangerous scheme involving shell corporations, unforgiven war crimes, and the brazen theft of 50 million euros.

Transporting readers from the cobblestoned streets of Luxembourg to the snow-capped peaks of the Alps to an unforgettably climactic scene in Paris, THE EXPATS is an international thriller in the tradition of established masters such as John Le Carré, Christopher Reich, Ken Follett, and Frederick Forsyth. At the same time, it is a skillfully drawn, character-driven exploration of marital deception that breaks the bounds of the espionage genre and will appeal broadly to fans of psychological suspense.

With rights already sold in twelve countries and a major film option, THE EXPATS introduces Chris Pavone as a serious new talent to be watched—and as a writer with the rare gift of keeping readers enthralled and guessing until the very last page.

ABOUT THE AUTHOR: Chris Pavone, a book editor for nearly two decades, recently returned to New York City after a sojourn to Luxembourg. The Expats is his first novel. You can find Chris and The Expats on Facebook at www.facebook.com/#!/expatsbook