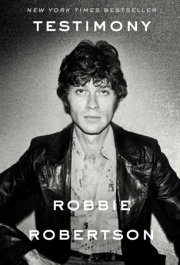 “One of the best books on rock and roll ever written.”
—Jann Wenner

“I can’t think of a memoir that is more compelling, fascinating, or rich in history.”
—David Geffen

“A book of memories and wonders, a personal testament of a magical time in American music from someone who was there, at the center of it all.”
—Martin Scorsese

On the fortieth anniversary of the Band’s legendary final concert, “The Last Waltz,” Robbie Robertson finally tells his own spellbinding story of the band that changed music history, his extraordinary personal journey, and his creative friendships with some of the greatest artists of the past half century.

Robbie Robertson’s singular contributions to popular music have made him one of the most beloved songwriters and guitarists of his time. With songs like “The Weight,” “The Night They Drove Old Dixie Down,” and “Up on Cripple Creek,” he and his partners in the Band created music that defined a generation and that has endured for decades, influencing countless musicians. Now, with the long-awaited TESTIMONY (Crown Archetype; hardcover; $30.00; On sale November 15, 2016), Robertson shares his candid and fascinating account of the group’s storied career as only he can tell it.

In lyrical and insightful prose, Robertson weaves together the journey that put him at the heart of some of the most pivotal events in music. He reflects on his half-Jewish, half-Mohawk upbringing on the Six Nations Reserve, where he was first introduced to the art of serious storytelling. He recounts his odyssey at sixteen to the Mississippi Delta, the fountainhead of American music, and the wild early years on the road with rockabilly powerhouse Ronnie Hawkins and the Hawks. He details the trial by fire of “going electric” with Bob Dylan on his trailblazing 1966 world tour and their ensuing collaborations, including the legendary Basement Tapes. He takes us behind the scenes of the formation of the Band and the forging of their unique sound—somewhere at the crossroads of country, soul, and rock ‘n’ roll—culminating with history’s most famous farewell concert, captured in one of the greatest concert films of all time, Martin Scorsese’s The Last Waltz.

TESTIMONY is a revealing look back at a crucial moment in rock ‘n’ roll, when legends like Buddy Holly and Bo Diddley crisscrossed the circuit of clubs and roadhouses from Texas to Toronto, when the Beatles, Hendrix, the Stones, and Warhol moved through the same streets and hotel rooms. It’s the story of exciting change as the world tumbled through the ‘60s and early ‘70s, and a generation came of age, built on music, love, and freedom. Above all, it’s the moving story of the profound friendship between five young men who together created a new kind of popular music. A feat of memory and imagination told with remarkable openness and the unparalleled storytelling chops of one of our era’s greatest songwriters, Robertson’s TESTIMONY belongs on the reading list of every music fan.

On November 11, Robertson will release a new musical anthology, also entitled Testimony, on UMe. The eighteen-track collection, deftly curated by Robertson to be an important complement to the memoir, features a mix of live and studio tracks spanning his entire career.

ROBBIE ROBERTSON was the guitarist and principal songwriter in the Band. He has produced many movie soundtracks for Martin Scorsese and others, and continues to record as a solo artist. His most recent record is the critically acclaimed How to Become Clairvoyant.

Rhino will celebrate The Last Waltz with the release of four new Fortieth Anniversary Editions, including the pairing of the audio and video for the first time. All formats will be available November 11 except the Collector’s Edition, which will be available December 9.

“Robbie Robertson’s Testimony is a book of memories and wonders, a personal testament of a magical time in American music from someone who was there, at the center of it all, playing and casting spells and writing songs that helped define those great lost years. There’s history here, and anecdote, regret and reminiscence, a long fond look back at the trials and triumphs of finding your voice then holding your ground. The tone is easy, conversational, like reminiscing with a friend about things you never realized you were part of too. Robbie brings you along with him, keeps you right by his side first to last, just the way his songs do, drawing you close, spellbound by his easy sorcery. You can feel the music in every word.”

“Well, once I started, I couldn’t put it down. It is such a well-paced, well-structured narrative. Robertson’s voice is powerful and strong. He has harnessed vivid language to a clean, elegant, writing style, and the sense of honesty, openness, and completeness makes it so very compelling. The personal and the historic that he bears witness to is, of course, extraordinarily special. One of the best documents of our times. And one of the best books on rock and roll ever written.”
—Jann Wenner

“Nobody tells a story like Robbie Robertson. I can’t think of a memoir that is more compelling, fascinating, or rich in history. Across every page you can feel his love, passion, and musical genius.”
—David Geffen

“Robertson recalls all the key moments of an eventful life with a songwriter’s eye for detail. . . . Essential for any devotee of the Band, Dylan, or rock music in the last half of the 20th century.”
—Kirkus Reviews, starred review

“This long-awaited and colorfully told memoir paints a masterpiece of a life in rock and roll.”
—Publishers Weekly, starred review