How to Cook Basically Anything (An Official Tasty Cookbook) 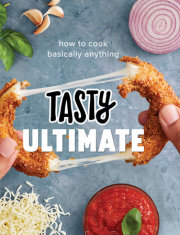 Highlights include:
PART ONE – IMPRESS YOURSELF