Laid-Back Living by the Water 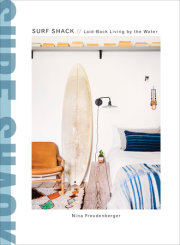 In SURF SHACK: Laid-Back Living by the Water (Clarkson Potter; April 11, 2017; $35.00; Hardcover), interior designer Nina Freudenberger gives readers a glimpse inside the bungalows, trailers, cabins, and beach homes where surfers retreat after a day on the waves. Here are houses of both longtime enthusiasts and dedicated newcomers that reflect not just a sport or passion, but also a way of life.

The twenty-six surfers’ stories that are brought to life by writer Heather Summerville include artists, designers, and creatives who have all found a way to intersect their love of the water with their entire way of living. Locations and aesthetics range from a desert hideaway in Ojai, California, a coastal cabin in Bells Beach, Australia, and a mountain house in Hayama, Japan, to a farmhouse family compound in Malibu, California, a converted B&B in West Marin, California, a houseboat in the Rockaways, and a Nordic A-frame in Montauk, New York. The book is an authentic

glimpse into the world of surfers and surf culture through their domestic environments, and beautiful photographs by Brittany Ambridge capture the lifestyle, architecture, interior décor, and details of these like-minded surfers from around the world.

With more than 250 vibrant photographs of room details and bright beaches, SURF SHACK captures the soulful milieu of a lifestyle we all aspire to.

NINA FREUDENBERGER is the founder of the boutique interior design firm Haus Interior, located in both NYC and LA. In addition to her studio work, her line of Haus hand-poured candles are carried in more than 200 design and gift stores nationwide, represented in all fifty states and internationally. Nina and her work have been featured in Elle Décor, New York Times, New York magazine, Elle, Travel and Leisure, Domino, Martha Stewart Living, Design*Sponge, Remodelista, Apartment Therapy, Domaine, and more.

Homeowners and locations included in the book: