THE SPY AND THE TRAITOR by Ben Macintyre

The Greatest Espionage Story of the Cold War 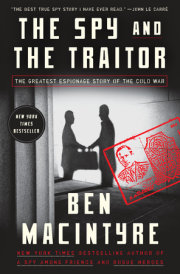 The Spy and the Traitor

John le Carré calls it “The best true spy story I have ever read.” Quite the compliment from the master of the spy novel for New York Times bestselling author Ben Macintyre’s latest work, THE SPY AND THE TRAITOR: The Greatest Espionage Story of the Cold War (Crown; September 18, 2018). With his acclaimed titles including A Spy Among Friends, Double Cross, Operation Mincemeat, and Agent Zigzag, Macintyre has proven himself a master in his own right. In gripping, edge-of-your-seat narratives, he has shined a light on the secret agents whose mastery of craft changed the course of history. Now, in THE SPY AND THE TRAITOR, he has outdone himself, taking us into the Cold War and the secret world of Oleg Gordievsky, one of the greatest spies of the twentieth century.

Like his father before him, Oleg Gordievsky was a faithful servant of the KGB and upholder of Soviet ideals. He was admired by colleagues for his dogged work ethic, and—while some resented his shrewdness and air of sophistication—the remarkable intelligence he was able to bring to his superiors made him an incredibly valuable asset. Gordievsky would rise through the ranks of the KGB to one of its most exalted positions as rezident of the Soviet embassy in London. But what no one knew—save for a few members of MI6—was that for over ten years, he was acting as a double agent for the West.

After one of his first postings for the KGB in Copenhagen, Gordievsky quickly became disillusioned with the idea of Communism and the Soviet state. He would offer up his services to MI6, and for years Gordievsky and his handlers engaged in a carefully calibrated game of espionage. The intelligence that he provided to MI6 would guide diplomatic relations between the UK, United States, and USSR to the end of the Cold War, as British Prime Minister Margaret Thatcher and U.S. President Ronald Reagan came to rely heavily on Gordievsky’s insights into Soviet intelligence and politicians. Gordievsky’s intelligence was so valuable that the CIA grew determined to know where such prized information was coming from. They secretly set up a task force to try to identify MI6’s spy, unaware that the agency’s own head of counterintelligence, Aldrich Ames, was himself a double agent working for the KGB. Gordievsky was betrayed, and just as the Cold War was beginning to thaw, MI6 would find itself in the nightmare scenario of having to exfiltrate a spy from deep within Russia.

Macintyre’s recounting of the harrowing attempt to secret Gordievsky out of Moscow reads like the very best pulse-pounding thriller. He has spent countless hours interviewing all of the key players—including Gordievsky himself, now almost eighty and living in a safe house under tight security in England—giving this astonishing figure his proper due.

With Russian spies in the news—hacking American elections or winding up poisoned in London—and the specter of Putin’s drive to return Russia to superpower status, THE SPY AND THE TRAITOR feels ripped from the headlines, a story of espionage and intrigue as terrifying and timely as ever.

About the Author: Ben Macintyre is a writer-at-large for The Times of London and the bestselling author of A Spy Among Friends, Double Cross, Operation Mincemeat, Agent Zigzag, and Rogue Heroes, among other books. Macintyre has also written and presented BBC documentaries of his work.