THE SMILING MAN By Joseph Knox 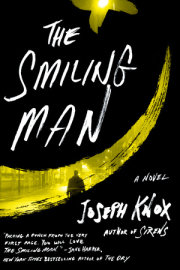 From the acclaimed author of SIRENS, Detective Aidan Waits returns in a riveting thriller that will have everyone asking, “Who is the Smiling Man?”

Joseph Knox dazzled readers and critics with his gripping thriller SIRENS, introducing Detective Aidan Waits of the Manchester Police Department—damaged, stubborn, yet willing to break the rules to do the right thing. Knox brings back Aidan in THE SMILING MAN (Crown; January 22, 2019). Released in the UK earlier this year, THE SMILING MAN was praised by Metro as a “crime fiction masterpiece,” and the Sunday Express declared SIRENS “one of the best books published last year, and this intense, blackly comic follow-up is just as good.” Gritty and tense, with dark humor sprinkled in, THE SMILING MAN is based on the perplexing, unsolved case of the Somerton Man, who was found dead on an Adelaide beach in the 1940s. Knox brings the case’s astounding details into modern-day Manchester, creating a mind-bending thriller.

Aidan has resigned himself to the Manchester PD night shift, a dumping ground for cops with no career or no life—requirements that Aidan satisfies on both fronts. He is stuck with partner Detective Inspector Peter Sutcliffe, a pairing made challenging by the fact that the only thing they have in common is mutual contempt. They patrol a litany of petty crimes under the relentless summer heat, until the monotony is broken one night by a call to investigate a break-in at a massive, empty hotel known as the Palace.

The routine break-in call soon takes a turn when they discover the body of a dead man, sitting upright. The tags have been cut from his clothes, his teeth have been filed down and replaced with crowns, and even his fingerprints have been removed. And he is smiling.

As Aidan races to figure out the identity of the man, he investigates the hotel’s feuding, soon-to-be-divorced owners, delves into the dark underbelly of the city’s sex trade, and struggles to make sense of the few, baffling clues left behind, including a page of a Persian poetry book that had been sewn into the man’s trousers.

But before long Aidan becomes a target himself, by somebody wishing to make the case disappear. As the threats escalate, Aidan realizes that the answers he is seeking may lie within a far greater evil in his own past. As the case evolves, Aidan comes to terms with an uncomfortable truth—to discover the smiling man’s identity, he must finally confront his own.

About the author: JOSEPH KNOX was born and raised in and around Stoke and Manchester, where he worked in bars and bookshops before moving to London. He runs, writes, and reads compulsively. The Smiling Man is the follow-up to his acclaimed and bestselling debut, Sirens.