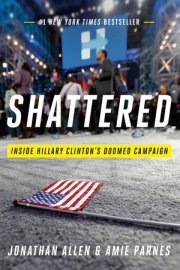 A GRIPPING POSTMORTEM OF HILLARY RODHAM CLINTON’S FRAUGHT 2016 PRESIDENTIAL RUN, TOLD FROM INSIDE THE CAMPAIGN THAT WAS SUPPOSED TO WIN IT ALL

In the vast gulf between the Trump presidency that is and the Hillary Clinton presidency that could have been sits a haunting, persistent question: How did she lose? She was the bulletproof Democratic nominee—arguably the most qualified presidential candidate in history. Yet, on the morning after election day, she was merely history. Hillary Clinton’s loss to Donald Trump is the tragic story of a sure thing gone off the rails that prompts a reevaluation of the very notion of that “sure thing.” The deeper truth of the 2016 election is much more pointed: For every James Comey revelation or hindsight acknowledgment about the electorate, no explanation of defeat can begin with anything other than the core problem of Hillary’s campaign—the candidate herself.

In SHATTERED: Inside Hillary Clinton’s Doomed Campaign (Crown: April 18, 2017) Jonathan Allen, head of content at Sidewire and a columnist at Roll Call, and Amie Parnes, the senior White House correspondent for The Hill, combine over a year and a half of extensive reporting with more than one hundred interviews with Clinton’s greatest friends, foes, staff, and factions on both sides of the aisle. Coupled with their deep knowledge of Clinton from their previous book HRC (published by Crown in 2014), SHATTERED offers readers a unique look into the heart of a campaign that was troubled from the start.

Allen and Parnes detail the ways in which Clinton contracted and damaged the Democratic party, which has serious implications for the upcoming elections—now more important than ever. Punishing up-and-coming Democrats who didn’t shill for her in the 2008 Democratic primary and taking up all of the room in the 2016 Democratic primary by boxing out Joe Biden from the race entirely, Clinton has forced Democrats to turn to party standard bearers for a way forward as young party leaders seem to be few and far between. In an interview the authors can offer analysis on how Clinton injured the Democratic party during the course of her campaign, where the party is now, and how it has reached this crisis point.

SHATTERED reveals how Clinton herself made victory an uphill battle—how her leadership style promoted drama and infighting rather than quelling it, how her tendency to steer into voters’ worst assumptions irreparably hobbled her impact, and how the campaign failed to internalize the lessons of populist fury from the hard-fought primary against Bernie Sanders. The Clinton campaign faced difficulties unlike any other campaign in American history—a partisan congressional investigation; a primary opponent who attacked her character; a rogue FBI director; the rank misogyny of her Republican rival; a media that scrutinized her every move; and even a Russian campaign to defeat her. Yet she was still the front-runner through the very last days of this heated election, a status that masked a crucial weakness of candidate and strategy that would soon be shockingly exposed.

Taking us from the campaign’s difficult beginnings through the surreal, often confounding experience of running against Donald Trump and the bewildering terror of election night, SHATTERED tells an unforgettable story with urgent lessons both political and personal. Its revelations will forever change the way we understand just what happened on November 8, 2016.

Jonathan Allen is the head of content at Sidewire, a columnist at Roll Call, and an adjunct professor at Northwestern University. He is the recipient of the Dirksen and Hume Awards and has written about national politics for more than a decade, including as a former Washington bureau chief for Bloomberg News and a former White House bureau chief for Politico. He is a frequent guest on national television and radio programs.

Amie Parnes is the senior White House correspondent for The Hill in Washington, where she covered Hillary Clinton during the 2016 presidential election and is now covering the Trump administration. She has written about politics for over a decade. Prior to this assignment, she chronicled the Obama White House and the 2008 and 2012 presidential elections for Politico and The Hill, respectively. She appears regularly on national television programs.