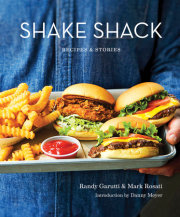 “Shake Shack is an experience, it’s a community gathering place
that just brings people together.”

SHAKE SHACK: RECIPES & STORIES (Clarkson Potter/Publishers; on sale May 16, 2017; $26.00; hardcover) is the first-ever cookbook from restaurateur Danny Meyer’s beloved modern-day “roadside” burger stand, which rose from humble beginnings as a hot dog cart in New York City to become a restaurant that now has 130 Shacks and counting.

In SHAKE SHACK, CEO Randy Garutti and culinary director Mark Rosati offer an insider peek into what has made Shake Shack so special, the people, the places, and the business lessons learned along the way. They share the recipes, history, and inner workings of one of the most beloved brands in the world. Each chapter focuses on a main menu item, including burgers, fries, shakes, and hot dogs, as well as how to make your own ShackBurger and local Shack favorites unique to certain locations.

Sample chapters and recipes featured in the book include:

Produced and edited by Dorothy Kalins, the book delivers 70 recipes and 200 fun photos, and also features clever infographics, Shack facts, trivia, and limited edition burger recipes from some of the country’s favorite chefs. Finally, home cooks can bring recipes from their favorite burger-and-shake stand into their own homes.

RANDY GARUTTI, the CEO of Shake Shack, is responsible for the performance, excellence, profitability, and direction of Shake Shack. Prior to leading Shake Shack,  Randy was for eight years a Senior Manager at Union Square Hospitality Group (USHG), most recently as Director of Operations, overseeing the operations for all USHG restaurants. In 2006, Randy was named one of Crain’s Top 40 Under 40. In addition, Randy served as a General Manager of Union Square Café and Tabla, both of which have won numerous accolades in the hospitality industry. In January 2003, Randy was named one of the Top 50 General Managers in the country by Nation’s Restaurant News. Before joining USHG thirteen years ago, Randy was the General Manager of the acclaimed Canlis Restaurant in Seattle. Prior to that, he worked in various management roles with Chart House Restaurants in Aspen, CO, and Maui, HI. Randy graduated from Cornell University’s School of Hotel Administration in 1997 and also studied at La Sorbonne in Paris.

MARK ROSATI joined the Shake Shack team at the original Madison Square Park location as a Manager in the summer of 2007. Since then, Mark has gone on to help develop permanent menu items and local seasonal specials for Shake Shack locations throughout the United States and abroad. Prior to joining Shake Shack, Mark cooked at NYC’s Gramercy Tavern from 2005 to 2007. He grew up in Stonington, CT, where at an early age he enjoyed many of the state’s legendary roadside seafood and burger shacks. Mark was named the Culinary Director of Shake Shack in 2013.

DANNY MEYER is the CEO of Union Square Hospitality Group and the founder of Shake Shack. Union Square Hospitality Group includes Union Square Cafe, Gramercy Tavern, Blue Smoke, Jazz Standard, The Modern, Maialino, Untitled, North End Grill, Marta, Porchlight, Union Square Events, and Hospitality Quotient, a learning and consulting business. Danny, his restaurants, and his chefs have earned an unprecedented 28 James Beard Awards, and in 2015 Danny was named to the TIME 100 list of the Most Influential People in the World. Danny’s first business book, Setting the Table (HarperCollins, 2006), a New York Times bestseller, examines the power of hospitality in restaurants, business, and life. An active national leader in the fight against hunger, Danny serves on the board of Share Our Strength and has long supported hunger relief initiatives, including City Harvest, God’s Love We Deliver, and the Bed-Stuy Campaign Against Hunger.