The Making of the Security State 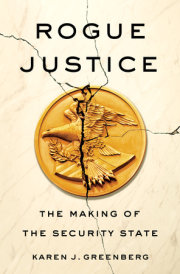 Rogue Justice: The Making of the Security State

A DEEPLY REPORTED LOOK AT HOW THE ARCHITECTS OF THE WAR ON TERROR TRANSFORMED AMERICAN JUSTICE INTO AN ARM OF THE SECURITY STATE—HIJACKING INSTITUTIONS AND LAWS CHARGED WITH UPHOLDING THE CONSTITUTION AND THE RULE OF LAW AND USING IT AS LEGAL COVER FOR MASS SURVEILLANCE, TORTURE, AND MORE

The day after September 11, President Bush tasked the attorney general, John Ashcroft, with preventing another terrorist attack on the United States. Karen J. Greenberg, the director of the Center on National Security at Fordham University School of Law, begins ROGUE JUSTICE: The Making of the Security State (Crown; May 24, 2016) at this pivotal moment in recent American history. Her deeply reported account tells the full story of what happened next, as law and policy were fundamentally reshaped to serve the war on terror. Based on years of research and countless interviews with insiders at the highest levels of government, ROGUE JUSTICE could only have been written by Karen J. Greenberg, one of this country’s top experts on Guantánamo, torture, and terrorism. Now, finally, the stories of surveillance, interrogation, detention, targeted killings, prosecution, and military commissions are told in one volume, drawing connections and parallels that have been heretofore unacknowledged.

After September 11, the Bush administration turned to the Department of Justice to protect the nation, by giving license to activities that had previously been unthinkable—from the NSA’s spying on US citizens to indefinite detention to torture. With the aid of individual DoJ lawyers—and, at times, the courts—the government reformed the laws on intelligence gathering, rethought terrorism prosecutions, and curtailed the rights of individuals suspected of national security–related crimes.

When President Obama took office, many observers expected a reversal of these encroachments upon civil liberties and justice, but the new administration found the rogue policies to be deeply entrenched and, at times, worth preserving. Obama ramped up targeted killings, held fast to aggressive surveillance policies, and fell short on bringing reform to detention and interrogation.

ROGUE JUSTICE connects the dots for the first time—from the Patriot Act to today’s military commissions, from terrorism prosecutions to intelligence priorities, from the ACLU’s activism to Edward Snowden’s revelations. This stunning exposé introduces key players and events in the post-9/11 justice system, showing that time and again, when liberty and security have clashed, justice has been the victim.

About the Author: Karen J. Greenberg is the director of the Center on National Security at Fordham University School of Law and a member of the Council on Foreign Relations. She is also the author of The Least Worst Place: Guantanamo’s First 100 Days and coeditor of The Torture Papers: The Road to Abu Ghraib.

“A terrifying history of American surveillance in the twenty-first century . . . The author fully explains the government’s panicked motivation for permitting torture and secretly watching its own citizens. Yet the book’s central question is timeless: Once a government takes rights away, can they ever be restored? A sophisticated study of executive tyranny in the never-ending war on terror.”

“There is nobody I would rather read than Karen Greenberg on the collision of public fears, core legal values, and the insatiable demands of the national security state. Rogue Justice is no political tract. It is a measured, richly informed, and gorgeously written narrative of well-meaning presidents, lawmakers, judges, and bureaucrats who lost their bearings after 9/11. Greenberg knows these people. They are not cartoons to her. Many of them have passed through her New York policy salon, where Greenberg holds court over a revolving cast of soldiers, spies, cops, geeks, public officials, and some of their fiercest critics. She is immersed in their worlds, yet uncaptured. Rogue Justice offers a behind-the-scenes tour that blends fresh insights with stories that we have not heard before.”

“In her indispensable book, Karen Greenberg documents the death of American liberty by a thousand cuts. In these times of dangerous fearmongering, she reminds us of how fragile American democracy is and why it is vital that we confront fear with courage, and stay true to our best principles.”

“Rogue Justice is the definitive account of the legal machinations behind the ‘war on terror.’ 9/11 America’s top lawyers argued for and defended torture, mass surveillance, and indefinite detention. Karen Greenberg expertly guides us through the thicket of legal questions generated by the war on terror, laying out with great clarity the stakes involved and painting deft portraits of the key players who set the nation down a path we associate more with banana republics than with American ideals.”

—PETER BERGEN, author of United States of Jihad and Manhunt

“Rogue Justice vividly tells a decade long story of how the US justice system and those entrusted to ensure the rule of law facilitated the birth and expansion of the post 9/11 security state.”

“Rogue Justice is a blistering indictment of the way that America’s leaders, steered by fear in the wake of the 9/11 attacks, retreated from the very principles on which the nation was founded. In clear, sober prose, Greenberg gives us a vital overview of the way that the administrations of Bush and Obama pursued, in growing secrecy, increasingly unrestrained executive power and weakened the Bill of Rights in ways that led to torture, targeted killings, and mass surveillance. Thankfully, she also offers us profiles in courage of those mostly unsung heroes who resisted. It is a cautionary tale of the fragility of the rule of law, and a clarion call for all Americans to stand up to terror with the courage of our convictions.”

—ALEX GIBNEY, director of Taxi to the Dark Side and Going Clear

“Rogue Justice reads like a well-honed argument delivered to a jury. Greenberg has wrestled complex questions of law and policy into a clear, compelling narrative that shows us how the United States abandoned its principles of justice and due process during the war on terror, and why we must fight to bring them back. A must-read for anyone who cares about the Constitution.”

—LAWRENCE WRIGHT, author of The Looming Tower and Thirteen Days in September

“Karen Greenberg is one of our leading national security experts, and her book combines sweeping narrative with deep analysis, yielding a powerful history of the legal aspects of counterterrorism policy since 9/11. Rogue Justice is an unprecedented achievement that will change the way we think about the rule of law in this country.”

—ALI SOUFAN, author of The Black Banners: The Inside Story of 9/11 and the War Against al-Qaeda