The Hotelier, The Chef, and the Rise of the Leisure Class 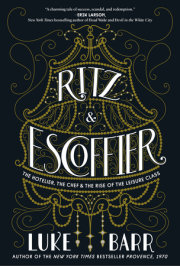 “Barr’s prose is lively and his sourcing impeccable . . . a thoroughly enjoyable look into a defining moment of culinary history.” —Publishers Weekly

“[A] lively, gossipy account . . . not just a fluidly structured dual biography, but a provocative history of a turning point in the evolving hotel and restaurant industry.”

In his New York Times bestseller Provence, 1970, Luke Barr brought to life the moment in time when Julia Child, James Beard, and M. F. K. Fisher gathered to shape the future of food in America. In his transporting new book, RITZ & ESCOFFIER (on sale April 3), Barr takes readers on a journey to an equally providential but more distant past: the turn of the twentieth century, when two eccentric men arrived in London to take charge of the just-opened but already floundering Savoy Hotel.

“César Ritz and Auguste Escoffier each came from modest backgrounds, and their formal educations ended quite early,” says Barr. “Yet though they were outsiders in class-conscious London, they were visionaries who invented the idea of the restaurant as theater, and food as luxury.” Soon enough, their combined genius transformed the Savoy into the most spectacularly successful hotel in the world—the perfected embodiment of luxury and style.

Key to their success was their prescient embrace and advancement of a new kind of cosmopolitanism that welcomed a mix of aristocrats and the nouveau riche, traveling Americans, Jewish industrialists, Italian opera stars, London politicians, writers, and bohemian artists—in short, anyone with enough money to pay the bill. Rich in detail and atmosphere, RITZ & ESCOFFIER introduces us to the influential, peacocking people who made the Savoy dining room the place to be: the brilliant Oscar Wilde, notorious for making lecherous advances on young members of the staff; the legendary actress Sarah Bernhardt, eating dinner with a small live lizard attached to a fine chain and pinned to her dress; the pleasure-seeking Prince of Wales (the future King of England), indulging his great appetites, both culinary and otherwise; and others. Semi-celebrities in their own right, Ritz and Escoffier presided over this glittering, electric world, Ritz wearing shoes a half size too small to hide the shame of what he considered to be his oversized “peasant feet.”

And then disaster struck: Ritz and Escoffier were unceremoniously fired. “The story of the scandal that ended their employment at the Savoy was kept secret for many years—the truth only began to come out in the mid-1980s, almost a hundred years after the fact, when documents were leaked,” says Barr. Unbowed, Ritz and Escoffier moved to Paris to repeat their winning formula all over again—this time, by opening the Hôtel Ritz, a fulfillment of Ritz’s lifelong dream to own his own property. Seeking vindication, they soon returned to London to open the Carlton Hotel, also a huge success, but one that would cause the high-strung Ritz to suffer a nervous breakdown just as the hotel was preparing for the celebrations during the coronation of King Edward VII.

In the course of his extensive research, Barr stayed at the Savoy in London, poring over the hotel’s archives as well as those of the Victoria and Albert Museum. In Paris, he worked in the Ritz archives and toured the newly renovated hotel. He also visited Escoffier’s childhood home, now a museum devoted to the chef’s career, and met with his great-grandson, Michel Escoffier.

A delicious read with all the hallmarks of a superbly detailed novel and an impeccably researched work of journalism, RITZ & ESCOFFIER deftly brings to life the dazzling fin de siècle period via ten years in the lives of two legendary men whose legacies live on today.