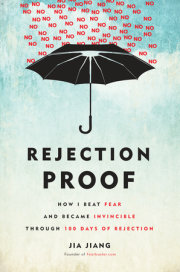 ‟Rejection Proof smashes fear in the face with a one-two punch. You’ll laugh out loud  at Jia’s crazy social experiments, but you’ll also go away thinking differently about what you can accomplish.”
—Chris Guillebeau, New York Times bestselling author of The Happiness of Pursuit and The $100 Startup

Jia Jiang came to the United States with the dream of becoming the next Bill Gates. But despite early success in the corporate world, his first attempt to pursue his entrepreneurial dream ended in rejection. He was crushed. Jiang realized that, like so many others, his fear of rejection was a bigger obstacle than any single rejection would ever be, and he needed to find a way to overcome his fear.

And with that goal in mind, Jiang’s “100 days of rejection” experiment was born.  During his experiment, Jiang willfully sought out rejection on a daily basis—from requesting a haircut from PetSmart (answer = no), to asking for a free burger refill (answer = no), to requesting Krispy Kreme doughnuts in the shape of the Olympic rings (answer = yes, with a viral video to prove it).

REJECTION PROOF (on sale 4/14/15, Harmony Books) chronicle’s Jiang’s adventures in rejection and the lessons that he learned along the way, including that even the most outrageous request can be granted if asked in the right way. He shares strategies for successful asking, including how to pick targets, how to ask the right follow-up questions, and how to get comfortable with public speaking.  And even more important, he shares techniques for handling rejection when it inevitably comes, and ways to develop confidence—a plan that can’t be derailed by a single setback.

Some of the lessons Jiang shares in REJECTION PROOF include:

Filled with humorous stories and valuable insight, REJECTION PROOF is a fun and thoughtful examination of learning to overcome fear and daring to live more boldly.

ABOUT THE AUTHOR: Jia Jiang is the founder of the popular blog and video series 100 Days of Rejection. His story has been covered by dozens of news outlets, including Bloomberg Businessweek, Yahoo News, the Huffington Post, Forbes, Inc.com, MTV, Gawker, the Daily Mail, Fox News, and CBS’s The Jeff Probst Show. A native of Beijing, China, Jiang came to the United States as a teenager to pursue his dream of becoming an entrepreneur. Jiang holds an MBA from Duke University and a bachelor’s degree in computer science from Brigham Young University.