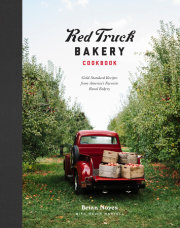 In 2008, at the height of the recession, Brian Noyes left his career as an art director to follow his passion for baking, and the acclaimed Red Truck Bakery was born in his Shenandoah Valley farmhouse and, quite literally, out of the back of his old red truck (which he purchased from fashion designer Tommy Hilfiger). The bakery grew quickly into two Main Street stores nestled among the apple orchards and rolling hills of rural Virginia, and through their popular mail-order service, which ships thousands of baked goods nationwide each year. Finally, home bakers everywhere can bring the beloved Red Truck Bakery into their own kitchens with Brian’s highly anticipated debut cookbook, Red Truck Bakery Cookbook: Gold-Standard Recipes from America’s Favorite Rural Bakery (Clarkson Potter | October 23, 2018 | $25.00 | Hardcover).

Full of charming anecdotes, Brian’s story of resilience, 85 keepsake recipes, and 75 evocative color photographs, Red Truck Bakery Cookbook is sure to become the new go-to baking book for bakers of all levels!

ABOUT THE AUTHOR:
BRIAN NOYES is the founder of Red Truck Bakery in Marshall, Virginia. He is the former art director of the Washington Post and several national magazines, including Smithsonian, Preservation, and House & Garden