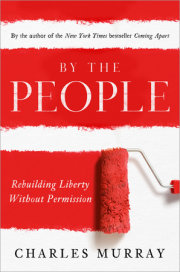 “By the People is a study in contradictions. It is simultaneously depressing and inspiring, technical and profound, infuriating and charming, but always compelling. Charles Murray plays the role of a liberty-loving Lenin asking the question, ‘What is to be done?’ To this end, he offers a practical guide to repairing our broken constitutional order. It is that rarest of books: a populist manifesto grounded in fact and logic.”
–Jonah Goldberg

“Liberty without permission? Selective civil disobedience? I’m in! At first I balked, but Murray makes a convincing case that a Madison Fund might scrape away the sclerosis of the suffocating state. As usual, his original arguments expand the way I think. When law is so complex that it’s indistinguishable from lawlessness, when the tax code is 4 million words long, something like systematic disobedience is badly needed.”
–John Stossel

American liberty is under assault. Whether we are trying to run a business, practice a vocation, raise our families, cooperate with our neighbors, or follow our religious beliefs, we run afoul of the government—not because we are doing anything wrong but because the government has decided it knows better. From The New York Times bestselling author of Coming Apart, a provocative manifesto on how to turn back the assault on American liberties and rebuild our freedom from the ground up.

Now available in paperback, BY THE PEOPLE: Rebuilding Liberty Without Permission (On sale: August 2, 2016 / Crown Forum / $16.00 / TR) Charles Murray illustrates how the federal government has unilaterally decided that it can and should tell us how to live our lives. If we object, they threaten, “Fight this, and we’ll ruin you.” Free-market economists, conservative intellectuals, Tea Party evangelists, and libertarians alike extol the virtues of limited government. Never have so many coalesced behind a set of ideas so widely accepted, and been so staggeringly far from political reality.

Political processes, meant to check federal power, have been broken. The Constitution has been neutered by the courts and the legislative process has become systemically corrupt, no matter which party is in control. Meanwhile, the federal government has grown at a dizzying rate in the last half-century, culminating in the current leviathan where federal spending accounts for 24% of GDP, the government lists 20 million employees, and federal funding comprises a quarter of all state and local revenues. Despite a sympathetic Supreme Court majority and a Republican Congress, the American ideal of limited government is on life support.

What has become clear to all supporters of the least government necessary to support individual liberty and free speech is this; the people must wrest back control of their own destinies or the American Project will fail. Amid these signs of a decayed civil liberties system, Murray has identified some good news from beyond the Beltway:

With these strong signs of a shift in American socio-politics, Murray reveals an even more shocking truth that he believes Americans are ready to exploit. Despite its vast size, the federal government operates under a fatal assumption. For all its legal power and claims to authority, its daily survival depends on our voluntary assent to its laws. Civil disobedience backstopped by legal defense funds can make large portions of the 180,000-page Federal Code of Regulations unenforceable, through a targeted program that identifies regulations that arbitrarily and capriciously tell us what to do. Americans have it within their power to make the federal government an insurable hazard, like hurricanes and floods, leaving us once again free to live our lives as we see fit.

BY THE PEOPLE does not require that only libertarians and conservatives participate—Murray recognizes the need for varied perspectives in reshaping the nation. The book’s hopeful message is that rebuilding our traditional freedoms does not require electing a right-thinking Congress or president, nor does it require five right-thinking justices on the Supreme Court. It can be done by we the people, using America’s unique civil society to put government back in its proper box.

Charles Murray is the W. H. Brady Scholar at the American Enterprise Institute. He came to national attention first in 1984 with Losing Ground and most recently in 2012 with Coming Apart. He lives with his wife in Burkittsville, Maryland