The Poke Cookbook: The Freshest Way to Eat Fish 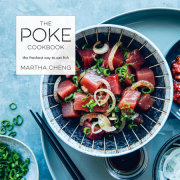 Poke (meaning “to slice” or “to cut into pieces” in Hawaiian) is a casual dish with a rich culinary history in the islands. It brings everyone together and is endlessly customizable. In The Poke Cookbook, Cheng offers recipes that include classic poke and modern riffs, as well as bases, bowls, and local-style accompaniments. Dishes range from the traditional Shoyu ‘Ahi to the more modern Sichuan Shrimp and Tobiko to vegetarian Beet and Macadamia, and finally to delectable bowls like Poke “Nachos” and Scallion Oil Noodles.

With 45 recipes and more than 30 lush color photographs, as well as an introduction dedicated to choosing and prepping fish, The Poke Cookbook puts a new spin on this ever-popular Hawaiian cuisine.

MARTHA CHENG is a Honolulu-based food writer, contributing to publications such as Eater, Condé Nast Traveler, and Frommer’s. She was the food editor at Honolulu Magazine for nearly four years, and before that worked in kitchens, food trucks, and bakeries in Hawai‘i and Northern California.