THE POINT OF IT ALL by Charles Krauthammer; Edited by Daniel Krauthammer

A Lifetime of Great Loves and Endeavors 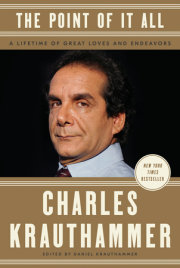 THE POINT OF IT ALL

A POWERFUL TESTAMENT TO THE LIFE AND LEGACY OF

Charles Krauthammer, the Pulitzer Prize–winning columnist, Fox News contributor and bestselling author died on June 21, 2018. In the time before his death, Krauthammer, along with his son, Daniel Krauthammer, compiled a new collection of writings, speeches and columns, which Crown Forum is honored to publish. THE POINT OF IT ALL, which follows the #1 New York Times bestseller Things That Matter, showcases Krauthammer’s philosophy on life and politics, and underscores his enduring legacy as one of America’s most distinguished intellectual leaders.

For three decades, Krauthammer elevated the opinion column to a form of art. Whether holding forth on American politics or reflecting on more esoteric passions like baseball, chess and space exploration, Krauthammer became known not only for his penetrating wit and insight but also for his ability to identify the hidden moral truths that animate our daily lives. The Financial Times lauded him as “the most influential commentator in the United States.” National Review described him as “a giant, a man who not only defended our civilization but represented what’s best in it.” The Washington Post declared, “Nothing and no one can replace him.” And while his punditry was celebrated by his contemporaries on the right, it was also respected by his critics on the left. “I cannot recall an ad hominem word,” said E. J. Dionne, a liberal columnist and colleague at the Washington Post. “He was a principled conservative. Differences were about politics.”

That reverence is precisely why his first published collection of columns, the #1 New York Times bestseller Things That Matter, resonated so deeply with readers, thought leaders, and critics alike. In its first year, it sold more than one million copies in print, audio and digital formats. And upon Krauthammer’s death, Things That Matter returned to the New York Times bestseller list, five years after its original publication.

In his beautifully written introduction to THE POINT OF IT ALL, Daniel Krauthammer grapples with the point of it all: of life, our place in the world, our contributions to society and the role that politics plays. He writes, “In this book, as in Things That Matter, my father applied his worldview to a breathtaking range of subjects: not just foreign policy, not just domestic, not just social issues, not just issues of art and taste. To everything. And all of it animated by common principles that give it both enlightening reason and moving beauty. His writing broadens one’s thinking and stirs the emotions and shows their essential connection. That is why I think his books will last far beyond the immediacy of today’s politics . . . and I believe his words will continue to push the world in a better direction for ages to come.”

Organized into five parts, the collection covers a wide range of topics, including essays on America’s place in the international arena and a major, previously unpublished new piece of writing, “The Authoritarian Temptation,” which reveals Krauthammer’s thoughts on the populist movements sweeping the world and the prospects for the future of global democracy. The collection also offers deeply personal writings—on family, friendship, fatherhood and the nature of a purposeful life—that are anchored by Daniel Krauthammer’s touching eulogy for his father.

For longtime readers of Krauthammer’s writing and newcomers alike, THE POINT OF IT ALL is an intelligent and thoughtful reminder of what made Charles Krauthammer the preeminent American columnist of his generation and offers an intimate look at the man behind the words.

CHARLES KRAUTHAMMER, winner of the Pulitzer Prize, was a syndicated columnist, political commentator, and physician. His column was syndicated to over 400 newspapers worldwide. He was a nightly panelist on Fox News’ Special Report with Bret Baier. He served as a member of the President’s Council on Bioethics. And along with his wife, Robyn, he cofounded Pro Musica Hebraica.

DANIEL KRAUTHAMMER’s writing has appeared in The Weekly Standard, National Review and The New Republic. He holds degrees from Harvard, Oxford and Stanford in economics and business administration, and has worked in government policymaking as well as in the entertainment and technology sectors. He spent the last year of his father’s life with him in hospital, where together they worked toward completing this book.