Patriot Number One by Lauren Hilgers 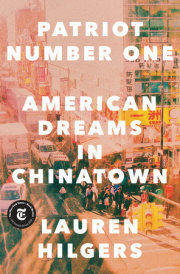 Praise and Accolades for Lauren Hilgers and
PATRIOT NUMBER ONE

A Kirkus Best Book of 2018 selection

A Longreads Best Books of 2018 selection

“Rich and absorbing….Hilgers…has written a penetrating profile of a man and much more besides: an indelible portrait of his wife and their marriage; a canny depiction of Flushing, Queens; a lucid anatomy of Chinese politics and America’s immigration system. Such a comprehensive project could have easily sprawled across a book twice as long, but Patriot Number One stays close to the people it follows, in a narrative as evocative and engrossing as a novel.” —New York Times

“This excellent book makes a powerful argument for why the U.S. should always remain a place of sanctuary, benefiting immensely from those who arrive from other shores.” —Kirkus (starred review)

“Zhuang and Little Yan jump off the page fully realized; it’s impossible not to root for them and their friends…A highly readable story about starting over in a new land; a must-read for all.” —Library Journal (starred review)

“An intimate portrait of one immigrant family’s struggles to assimilate into U.S. culture while examining the harsh realities that Chinese immigrants face in pursuing the American dream.” —Shelf Awareness

“A wonderfully intimate portrait of Chinese immigrants. Lauren Hilgers followed her irrepressible protagonist (or rather he followed her) from a village in southern China to Queens, N.Y., and her book is chockablock with fresh observations and humor about both worlds.”—BARBARA DEMICK, author of Nothing to Envy: Ordinary Lives in North Korea

“With her fluent Chinese and meticulous reporting, Lauren Hilgers has crafted a deeply sympathetic portrait of some of the country’s newest Chinese-Americans.” —PETER HESSLER, author of River Town and Oracle Bones

“Lauren Hilgers deftly weaves the personal with the political, the sweeping with the intimate, an immigration story that is genuinely timeless with a bracingly specific picture of Flushing, Queens, right now. She captures the ambitions and foibles of a trio of Chinese strivers, and demonstrates, in rousing detail, that whatever happens to America, it is still a country built on dreams.”—PATRICK RADDEN KEEFE, author of The Snakehead: An Epic Tale of the Chinatown Underworld and the American Dream

“Lauren Hilgers has found an unexpected hero in the southern Chinese teashop owner Zhuang Liehong, who launched perhaps the most important grassroots political movement in China since Tiananmen Square. Zhuang’s journey, and that of his home village, Wukan, have become the stuff of legend in China. In this fascinating book, Hilgers shows us how one person and one village can make a difference—however big the country, however tough the opposition—and how precarious a life in exile can be.” —PAUL FRENCH, author of Midnight in Peking

“A timely, informative book that offers a truthful account of the immigrant and exile experiences in the Chinese-American context. Hilgers captures the lives of her subjects with generosity, nuance, and psychological acuity. She writes with a sharp eye for telling details and a quiet intelligence, which make the book an absorbing read.”—HA JIN, author of Waiting, winner of the National Book Award for Fiction

“Patriot Number One brilliantly captures the bittersweet combination of joy, sorrow, and transformation of Chinese immigrants in New York City. Lauren Hilgers’ vibrant, compassionate writing transports readers to the gritty streets and vertiginous world of the recently arrived, enabling you to see America with a set of new eyes.” —ROB SCHMITZ, author of Street of Eternal Happiness; Shanghai correspondent, NPR

“The humanity, sly humor, and drama of Patriot Number One make it a delight to read. Its intertwined China-and-America narrative is revealing about both countries. This joins the list of books that easily convey larger messages through a vivid focus on the particular.”—JAMES FALLOWS, author of Postcards from Tomorrow Square

“A page-turning tale of the sub-world of exiled Chinese dissidents in American society. While Chinese immigration dates back generations, Lauren Hilgers has tapped into the more recent wave of Chinese political exiles and asylum seekers–and she astutely tracks their various struggles adjusting to life in America. A fascinating read.”—DAVID SHAMBAUGH, author of China Goes Global; professor of political science, George Washington University

“Lauren Hilgers expertly weaves history and current events into a compelling human narrative, writing with clarity and compassion about how the outsized dreams of immigrants can collide with the an indifferent world. True patriotism, this book shows us, means demanding better of the place that you love.” —LAUREN MARKHAM, author of The Far Away Brothers

“Lauren Hilgers captures with poignancy and humor the courage of immigrants who reach for the American dream….A touching and insightful portrait of modern Chinese immigrants and their community.” —JEAN KWOK, author of Girl in Translation

The deeply reported story of one indelible family transplanted from rural China to New York City, forging a life between two worlds

In the wake of the 2016 election, immigration has taken center stage in both private and public conversations. Amid debates about the “Dreamers,” about the idea of an impenetrable border wall, and about the status of large groups of immigrants from El Salvador to Haiti, one of America’s largest immigrant communities has gone remarkably underreported. In recent years, newly arrived immigrants from China have outnumbered those from Mexico, but there are few books about Chinese immigrants, especially those in the working-class Chinese community. In PATRIOT NUMBER ONE: American Dreams in Chinatown (Crown; on sale March 20, 2018), journalist Lauren Hilgers offers a deeply reported account that captures this vibrant community and humanizes the difficulties immigrants face.

Nearly three years ago, Hilgers received an unexpected call. “Hello, Lauren!” a man shouted in Mandarin. “We might be seeing you in New York soon!” The voice belonged to Zhuang Liehong, a Chinese dissident Hilgers had met the previous year while reporting a story. Despite having almost no contacts in the United States and a shaky grasp of English, Zhuang explained that he and his wife, Little Yan, had a plan to slip away from their American tour group and move to Flushing, Queens, to escape persecution back home. A few weeks later, in the middle of a snowstorm, they arrived on Hilgers’ doorstep.

In PATRIOT NUMBER ONE, Hilgers, who lived in Shanghai for six years and has written extensively about China, weaves the captivating story of Zhuang and Little Yan into a larger investigation of the Chinese community in Flushing, one of the fastest-growing immigrant enclaves in the United States. To be an immigrant, Hilgers makes clear, is to live between worlds, and even as she follows her subjects’ new lives she also depicts the lives they left behind in Wukan, China—the village whose rebellion galvanized democracy activists around the world and the place where Zhuang became a local hero. As a young man, Zhuang used the online alias “Patriot Number One” to recruit other supporters of democracy, whom he led in protest against Wukan’s corrupt regional leadership, garnering international attention and government concessions. As he saw his friends kidnapped by state thugs, survived his own arrest and interrogation, and mourned a friend’s death in police custody, he resolved to escape to America.

Yet once Zhuang and Little Yan arrive, they struggle to make sense of life in Flushing—to find work and an affordable place to live, to win asylum, to bring their infant son over from China, and to keep their own relationship intact. Zhuang’s natural optimism bumps up against Little Yan’s steady pragmatism as they negotiate surprises and disappointments—the rocky terrain that comes with making a fresh start. Zhuang comes to wonder whether “Patriot Number One” still has a role, in either America or Wukan.

In addition to Zhuang and Little Yan, we meet Tang Yuanjun, a democracy activist caught up in the Tiananmen Square crackdown in 1989, still struggling with a life of exile in the United States, away from the frontlines of political activism. And there is Karen, one of Little Yan’s friends from night school. A college graduate in China, she now works part-time in a nail salon as she attends vocational school, hoping for a better life. With a novelist’s eye for character and detail, Hilgers captures the joys and indignities of starting from scratch amid the byzantine network of employment agencies and language schools, asylum scams, and illegal housing that allow Flushing’s immigrants to survive—and the dreams, American or stubbornly Chinese, that sustain them.

About the Author: Lauren Hilgers lived in Shanghai, China, for six years. Her articles have appeared in Harper’s, Wired, Businessweek, The New Yorker, and The New York Times Magazine. Patriot Number One is her first book. She lives in New York with her husband and their daughter.