Palaces for the People by Eric Klinenberg

How Social Infrastructure Can Help Fight Inequality, Polarization, and the Decline of Civic Life 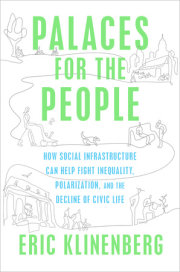 Palaces for the People

ADVANCE PRAISE FOR PALACES FOR THE PEOPLE

“Wow. A comprehensive, entertaining, and compelling argument for how rebuilding social infrastructure can help heal divisions in our society and move us forward. I can’t wait for people in my ideological bubble to ignore it!”
—Jon Stewart, former host of The Daily Show

“An illuminating examination . . . Klinenberg’s observations are effortlessly discursive and always cogent, whether covering the ways playgrounds instill youth with civic values or a Chicago architect’s plans to transform a police station into a community center. He persuasively illustrates the vital role these spaces play in repairing civic life.”

“If America appears fractured at the national level, the author suggests, it can be mended at the local one. This is an engrossing, timely, hopeful read, nothing less than a new lens through which to view the world and its current conflicts.”

“Fine reading for community activists seeking to expand the social infrastructure of their own home places.”

“This fantastic book reminds us that democracy is fortified and enlivened by people coexisting together in public, and that good design and support of a wide variety of public spaces can produce those mysterious things we call community, membership, a sense of belonging, a place, maybe a polity. In an age where the push for disembodiment and never leaving the house and fearing and avoiding strangers and doing everything as fast as possible is so powerful, this book makes the case for why we want to head in the opposite direction. It’s both idealistic and, in its myriad examples, pragmatic, and delightfully readable.”

—Rebecca Solnit, author of Men Explain Things to Me and A Field Guide to Getting Lost

“Eric Klinenberg believes that social life can be designed well, just as good buildings are. His book is full of hope, which is all the more striking because Klinenberg is a realist. He is a major social thinker, and this is a beautifully written, major book.”

“Reading Palaces for the People is an amazing experience. As an architect, I know very well the importance of building civic places: concert halls, libraries, museums, universities, public parks, all places open and accessible, where people can get together and share experiences. To create good places for people is essential, and this is what I share with Klinenberg: We both believe that beauty, this kind of beauty, can save the world.”
—Renzo Piano

“Eric Klinenberg combines a Jane Jacobs–eye on city life with knowledge of the latest research and practical ideas to address the crucial issues of the day—class division, crime, and climate change. This is a brilliant and important book.”
—Arlie Hochschild, author of Strangers in Their Own Land

“At a time when polarization is weakening our democracy, Eric Klinenberg takes us on a tour of the physical spaces that bind us together and form the basis of civic life. We care about each other because we bump up against one another in a community garden or on the playground or at the library. These are not virtual experiences; they’re real ones, and they’re essential to our future. This wonderful book shows us how democracies thrive.”
—Steven Levitsky and Daniel Ziblatt, authors of How Democracies Die

Americans are sorting themselves along race, class, and political lines, leading to a polarization we have not seen since the Civil War. In PALACES FOR THE PEOPLE: How Social Infrastructure Can Help Fight Inequality, Polarization, and the Decline of Civic Life (Crown; September 11, 2018) renowned sociologist and #1 New York Times bestselling author Eric Klinenberg shows how we can find common purpose through social infrastructure. This provocative book argues that the resilience of our communities rests not on shared values but on shared spaces capable of fostering crucial, sometimes even life-saving connections among us. Klinenberg explains that today’s most pressing issues—crime, education, the opioid crisis, and climate change—can all be addressed with place-based policies, and shows examples of how such policies have been put into effect with great success.

Klinenberg is a professor of sociology and the director of the Institute for Public Knowledge at New York University. He coined the term “social infrastructure” to describe the libraries, day-care centers, bookstores, coffee shops, and community gardens that shape our face-to-face interactions, and he has been exploring it for decades—ever since his landmark study of Chicago during the 1995 heat wave. He was the research director for the Obama administration’s Rebuild by Design project, where he worked to integrate social infrastructure into post–Hurricane Sandy rebuilding plans. In PALACES FOR THE PEOPLE, he applies this deep knowledge, stemming from years of both research and application, to diverse communities and challenges around the globe—from Singapore to Brazil and from East New York to Silicon Valley—to show how interactive physical spaces are combating some of the most profound problems of our time.

Public institutions, such as libraries, schools, playgrounds, parks, athletic fields, and swimming pools are all vital parts of social infrastructure. So are churches and synagogues, flea markets, and corner diners. Places where people can gather and linger encourage the formation of social bonds and promote interaction across group lines, and if our democracy is going to thrive, we need more of them. Investing in social infrastructure is just as urgent as investing in conventional hard infrastructure like bridges, levees, and airports. Often, we can strengthen both simultaneously, establishing vital social arteries that are also “palaces for the people,” to borrow the phrase Andrew Carnegie used to describe the 2,500 grand libraries that he built around the world.

Through these and many other case studies, using quantitative research as well as on-the-ground reporting, PALACES FOR THE PEOPLE demonstrates the critical role social infrastructure plays in civic life, and offers an inspiring vision of how it can help bridge our seemingly unbridgeable divides. “There’s no easy way to restore the sense of common purpose and shared humanity that makes civic life possible,” Klinenberg writes. “But the hard work that lies before us will be impossible if we don’t build better social infrastructure. The future of our democracy is at stake.”

About the Author
ERIC KLINENBERG is a professor of sociology and the director of the Institute for Public Knowledge at New York University. He’s the coauthor of the #1 New York Times bestseller Modern Romance. Klinenberg’s previous books include Going Solo: The Extraordinary Rise and Surprising Appeal of Living Alone, Heat Wave: A Social Autopsy of Disaster in Chicago, and Fighting for Air: The Battle to Control America’s Media. In addition to his books and scholarly articles, Klinenberg has contributed to The New Yorker, The New York Times Magazine, Rolling Stone, Wired, and This American Life.