The Orchid and the Wasp by Caoilinn Hughes 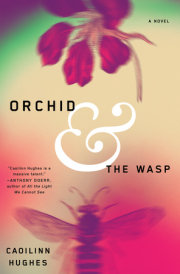 Orchid and the Wasp

A dazzlingly original debut, set in Dublin, London, and New York, exploring the ethical underbelly of contemporary society through the eyes of an utterly singular heroine

ADVANCE PRAISE FOR ORCHID & THE WASP

“[A] visceral and electrifying debut . . . in Gael, Hughes has created a mesmerizing and compelling force.”

“A gem of a debut about the way we live now.”

“Hughes delivers a compelling exploration of what it means to create art, skewering the arbitrary restrictions of art-world gatekeepers along the way. At the emotional heart of this book lies a darker question, though: What does it mean to make a performance of your own life, in service of your family, when the cost might be to lose them forever? As strange, musical, and carefully calculated as its unusual heroine.”

“Caoilinn Hughes’s highly ambitious fiction debut contains multitudes. . . . Kick-ass, whip-smart, and with ‘a tongue like a catapult,’ Gael belongs to a venerable tradition of feisty heroines. . . . Some serious intellectual themes are explored: the crisis of late capitalism; the redemptive power of art and love; free expression in sexual matters; and much else besides. But maybe most strikingly, Gael Foess makes a telling contribution to the unlikeable female narrator debate. . . . Readers are going to love her.”

“[Ireland has] produced far more than our expected quota of fine writers and we continue to do so. Then along comes Caoilinn Hughes and the bar doesn’t get raised, it gets broken—smashed and smithereened—and all the king’s horses and all the king’s men. . . . And so this wondrous odyssey goes, from Dublin to London to New York, with Hughes taking vicious, gleeful swipes at every falsity, every delusion, every instance of breathless wonder at the Emperor’s New Clothes. . . . Dazzling, heady fiction. Hughes is an award-winning poet and it’s barely concealable. She simply dances on the page, her imagination is riotous, her flawed characters have shape and color and sometimes heartbreaking humanity. When I finished this book I wanted to return to the start. Immediately. Just to savor it all again.”

“There’s the sound of marching coming from over the hill of Irish fiction. What was the new guard may find that it’s not leading the charge any more. Authors such as Sally Rooney (and I’d say Orchid & the Wasp is this year’s Conversations with Friends) and now Caoilinn Hughes, have an eye on Ireland but not the Irish eye we’re used to seeing through and Irish voice we are used to hearing . . . urbane, mid/cross-Atlantic, effortlessly cool and international, no longer small-town underbelly outcast. [Orchid & the Wasp] is ambitious, full-bodied, and fresh. Hughes casts her unique gaze; her artistic, analytical, and emotional intelligence on us; not just in Ireland, but our capitalist world and the personal, political, and social ramifications implicit in our acquiescence to, or indeed, championing of, its values. Bring Gael back, please.”

“It’s fittingly ironic that the first chapter of Caoilinn Hughes’s extraordinary debut novel is entitled ‘The Mediocrity Principle.’ From when she is first introduced as an eleven-year-old, the protagonist of Orchid & the Wasp sticks two fingers up to mediocrity and from the opening sentence Hughes’s prose does the same. . . . It’s a mesmeric, immersive, often hilarious reading experience, driven by the force of the imagery-rich writing and the cast of distinctive characters. . . . Asking complicated questions about meritocracy, Hughes explores the relationship between art and capitalism, art and ownership, art and authenticity, art and the gatekeepers of art.”

“Orchid & the Wasp is a gorgeous novel told in an onrush of wit and ferocity. Art-forging, smack-talking, long-distance-running Gael Foess, three times smarter than everyone around her, proves to be an unforgettable heroine, and her journey will rattle your most basic assumptions about money, ambition, and the nature of love. Caoilinn Hughes is a massive talent.”
—Anthony Doerr, Pulitzer Prize–winning author of All the Light We Cannot See

From the first sentence of ORCHID & THE WASP by Caoilinn Hughes (July 10; Hogarth), the charged, assertive voice of Hughes’s protagonist Gael Foess commands attention. The daughter of a self-interested investment banker and a once-formidable orchestral conductor, and sister to a vulnerable younger brother, Gael becomes hardened to the notion that people get what they deserve, and she determines to build a life raft in the midst of economic and familial collapse.

Picaresque in structure, each chapter of ORCHID & THE WASP takes place over the course of one day in Gael’s life. When the book opens, Gael is only eleven; already fighting to hold her family together in the wake of her father’s affair. When he leaves and takes the title deeds with him, Gael steps in to save her mother’s career, as much as her person, and convinces her fragile brother of their home’s structural integrity. Desperate to outmaneuver downward mobility, Gael concocts a scheme that takes her far from Dublin, through the coke-dusted social clubs of London, the New York gallery scene, and to the early days of the Occupy movement, in a brilliant bid to save her loved ones.

With the fierce and unmatched Gael at its center, ORCHID & THE WASP is ambitious, gorgeous, immensely intelligent, and unapologetic in the best sense of the word. It is also remarkably timely, shining a bright light on this late Neo-Liberalist moment, as well as the dearth of strong, driven female protagonists in literature and entertainment—increasingly apparent in this #metoo moment. Gael takes a shrewd, swift account of the world around her and then barrels in, full force, demanding for herself what won’t come about naturally.

In electric prose, ORCHID & THE WASP wrestles with sexuality, economics, and the fallacy of meritocracy, and crackles with joyful fury and humor. Hughes examines what makes for a good life; what we are owed and what we must earn; and how events in our lives can turn us into people we never intended to be. A first novel of astonishing talent, ORCHID & THE WASP announces an exciting and singular new literary voice in Caoilinn Hughes.

About the author: Caoilinn Hughes is an Irish writer whose poetry collection Gathering Evidence won the Irish Times Shine/Strong Award. She is a fellow of the James Merrill Foundation, the Bogliasco Foundation, the Tin House Workshop, and Art Omi, and has received a Literature Bursary Award from the Arts Council of Ireland, and the Ireland Funds Monaco Award. Her work has appeared in Tin House, Granta, POETRY, Best British Poetry, BBC Radio 3, and elsewhere. She divides her time between the Netherlands and Ireland.