Now in paperback: WALK THROUGH WALLS by Marina Abramović 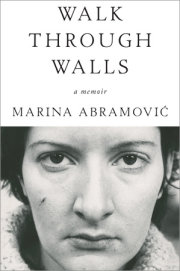 “Marina has lived like an unstoppable force of nature, with the kind of power that leaves me feeling breathless and disquieted—while at the same time profoundly impressed, awed, and inspired. As I turn the pages of her book, I hear her voice in my head, as if she were actually narrating the words. When Marina speaks, it sounds as if you’re listening to a legendary folktale from the ancient landscapes of the Balkan Mountains. Her voice is soothing, calm, and centered. It belies the trauma, fear, and darkness coiled at the root of her impulse to express and expunge.”

“Walk Through Walls is the story of a relentlessly independent artist thwarted in her quest for total connection with one person who eventually achieves it with thousands. Marina’s magic derives from an emerging ‘method’ that involves tests of endurance and deprivation more commonly associated with Navy Seal training than with the world of modern art. Just as her performances are impossible to turn away from, I could not put down this book.”

—Tom Reiss, Pulitzer and PEN award-winning author of The Black Count and The Orientalist

“Her page-turner of a narrative [is] at times shocking…genuinely moving, and always coruscatingly honest.”

To some, Marina Abramović is a cultural icon. To others, an enigma. In her stirring and unique memoir, WALK THROUGH WALLS (paperback reprint on sale March 6), Marina shares the intimate details of her life and the evolution of her renowned performance art.

One of the most provocative and celebrated artists in the world today, Marina has for more than four decades been making groundbreaking performance art that explores the relationship between audience and performer, the limits of the body, and the possibilities of the mind.  Her 2010 retrospective at MoMA, The Artist Is Present—a durational art performance during which she sat immobile for more than 750 hours in the museum’s atrium while spectators took turns sitting opposite her—attracted more than 750,000 visitors and has been viewed more than twenty-seven million times on YouTube.

WALK THROUGH WALLS begins with Marina’s childhood in postwar Yugoslavia, a dark place of perpetual shortages and drabness. The daughter of partisan parents who were national Communist heroes under President Tito’s regime, hers was a childhood of material luxury but emotional deprivation. Her parents met during World War II under extraordinary circumstances worthy of a sweeping Hollywood epic, but their marriage quickly devolved into war, with each of them sleeping with a loaded pistol by their bedside. Born prematurely and in poor health, Marina lived with her grandmother for the first six years of her life, with her parents visiting occasionally. “To me they were two strange people,” Marina writes, “showing up once a week and bringing me presents I didn’t like.” Shortly after she moved back home, Marina developed a mysterious illness

that caused her to be hospitalized for nearly a year, a period she tellingly describes as “the happiest time of my childhood.” When as a teen she began having agonizing migraines, she learned to suffer in complete silence and stillness, as she saw her mother do. Marina marks it as the beginning of her education in accepting and overcoming pain and fear. “I think that, in a certain way, my mother was training me to be a soldier like her,” Marina says. That training continued in earnest when Marina’s father—her only ally in the house—walked out on the family.

While Marina’s mother punished her for many things, she encouraged her interest in becoming an artist. Given her own studio in the family’s apartment, as well as money to buy paint while being denied more basic things, Marina began taking painting lessons. Lying in the grass one day, watching military jets leave white trails that slowly disappeared, she had a revelation. “There was something like a click in my mind,” Marina explains. “Why should I limit myself to two dimensions when I could make art from anything at all? I realized that being an artist meant having immense freedom, an unbelievable feeling for someone coming from a home where there was almost none.” In WALK THROUGH WALLS, she recounts the transition from her early days at Belgrade’s Academy of Fine Arts to an international artistic career. It was Marina’s performance of Rhythm 10, a piece inspired by a drinking game played by Russian and Yugoslav peasants, that officially set her on her path, proving to her that pushing her body past the limits of fear, pain, exhaustion, and danger could bring about emotional and spiritual transformation.

The beating heart of WALK THROUGH WALLS is an operatic love story—a twelve-year collaboration with fellow performance artist and provocateur Ulay, the first several years of which was spent penniless in a van traveling across Europe. “From the start, we breathed the same air; our hearts beat as one,” Marina writes. “We became a kind of melded personality.” Ultimately their collaborations took them all over the world, including a year spent living in the Australian desert, learning, as Marina describes it, “not to move, not to eat, not to speak.” When the relationship began to unravel, their long-held vision of walking the Great Wall of China and meeting in the middle to get married changed instead to a dramatic act undertaken to mark the end of their tumultuous partnership.

From her earliest days through her teaching of the Marina Abramović Method—a series of exercises she designed to explore boundaries of body and mind—Marina’s life has been singular, and her voice on the page—its cadence steeped in her Balkan roots—is nothing short of enchanting. Her perfectly imperfect English animates every page and the result is moving, epic, and dryly funny. In story after story, Marina plumbs the sublime march to artistic truth, and along the way she evokes not only her own coming of age, but an era of artistic ferment and possibility, the thread of which she has never lost. Her stalwart insistence on facing pain, fear, and vulnerability in the starkest possible terms as an artist comes to life in this vivid, candid memoir.

A startling performance in its own right, WALK THROUGH WALLS is eye-opening in the way only a true, bruising work of art can be.