Now in paperback: THE VEGETARIAN by Han Kang 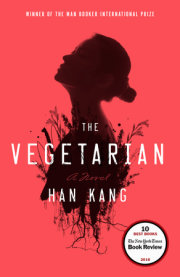 Praise for The Vegetarian

ONE OF ENTERTAINMENT WEEKLY’S “BEST BOOKS OF 2016 SO FAR”

“Ferocious . . . [Han Kang] has been rightfully celebrated as a visionary in South Korea. . . . Han’s glorious treatments of agency, personal choice, submission and subversion find form in the parable. There is something about short literary forms—this novel is under 200 pages—in which the allegorical and the violent gain special potency from their small packages.”—Porochista Khakpour, New York Times Book Review

“Astonishing . . . Kang viscerally explores the limits of what a human brain and body can endure, and the strange beauty that can be found in even the most extreme forms of renunciation.”—Entertainment Weekly

“Sometimes how a book or a film puzzles you—how it may mystify even its own creator—is the main point. The way it keeps slithering out of your grasp. The way it chats with you in the parlor even as it drags something nameless and heavy through the woods out back . . . that’s the spirit in which to approach The Vegetarian. . . . The Vegetarian has an eerie universality that gets under your skin and stays put irrespective of nation or gender.”—Laura Miller, Slate

“This book is both terrifying and terrific.”—Lauren Groff

“The Vegetarian is one of the best novels I’ve read in years. It’s incredible, daring, and stunningly moving. I loved it.”—Laura van den Berg

“A short novel of sexuality and madness that deserves its great success.”—Ian McEwan

“It takes a gifted storyteller to get you feeling ill at ease in your own body. Yet Han Kang often set me squirming with her first novel in English, at once claustrophobic and transcendent. . . . Yeong-hye’s compulsions feel more like a force of nature. . . . A sea like that, rippling with unknowable shadow, looks all but impossible to navigate—but I’d let Han Kang take the helm any time.”—Chicago Tribune

“This is a deceptive novel, its canvas much larger than the mild social satire that one initially imagines. Kang has bigger issues to raise. . . . The matter of female autonomy assumes urgency and poignancy.”—Boston Globe

Winner of the 2016 Man Booker International Prize, Han Kang’s astonishing novel THE VEGETARIAN (August 23, 2016; Hogarth), now in paperback, revolves around a simple decision with unforeseen and shocking consequences: an ordinary woman stops eating meat after she has a series of horrific nightmares. First published in South Korea, THE VEGETARIAN debuted in the United States earlier this year following tremendous international acclaim, and has since been universally hailed as a literary masterwork by the American press. Han, a professor in the department of creative writing at the Seoul Institute of the Arts, was a participant in the International Writing Program at the University of Iowa and has also won the Yi Sang Literary Prize, the Young Artist Award, the Korean Literature Novel Award, and the Manhae Literary Prize.

When gruesome, blood-soaked images start haunting Yeong-hye’s dreams, she resolves to cleanse herself by becoming a vegetarian, a decision that constitutes a shocking act of social rebellion, dividing her from her family and ostracizing her from her community. And as her new lifestyle manifests itself in ever more extreme and frightening forms, scandal, abuse, and estrangement begin to send Yeong-hye spiraling deep into the spaces of her fantasy. As she rejects all food in favor of water and exposes her naked body to sunlight in an attempt to photosynthesize, Yeong-hye gradually—inconceivably—starts to seem like a plant herself.

THE VEGETARIAN spans three years and is told in three chronological sections: the first narrated by Yeong-hye’s cold, passionless husband; the second by her brother-in-law, an artist struggling to express his vision who suddenly finds in Yeong-hye a new source of inspiration and desire; and the third, and most heartbreaking, by her older sister, who recognizes the disappointments of her own life reflected in Yeong-hye’s situation. Together, they trace Yeong-hye’s complete metamorphosis of both mind and body as her increasingly dangerous, impossible endeavor takes her far away from everything she knows.

Disturbing, tragic, and magnificently composed, THE VEGETARIAN is both an allegorical novel and an intimate story of obsession, choice, and our faltering attempts to adjust when faced with a life we cannot comprehend. With elegant, spare, and achingly beautiful prose, THE VEGETARIAN presents a devastating portrait of a family in crisis and a woman with a singular idea about the unlimited possibilities of her own existence. Yeong-hye’s metamorphosis will haunt you long after the final page.

Praise for The Vegetarian (continued)

“Indebted to Kafka, this story of a South Korean woman’s radical transformation, which begins after she forsakes meat, will have you reading with your hand over your mouth in shock.”—O, The Oprah Magazine

“If you love books that grab you by the throat and keep you wide-eyed and shocked throughout, you’ve got to pick up Han Kang’s The Vegetarian.”—EW.com

“A complex, terrifying look at how seemingly simple decisions can affect multiple lives . . . In a world where women’s bodies are constantly under scrutiny, the protagonist’s desire to disappear inside of herself feels scarily familiar.”—VanityFair.com

“A sharply written allegory that extends far beyond its surreal premise to unexpected depths.”—The Millions

“If it’s true you are what you read, prepare to be sliced and severed, painted and slapped and fondled and broken to bits, left shocked and reeling on the other side of this stunning, dark star of a book.”—Amelia Gray

“An elegant tale, in three parts, of a woman whose sudden turn to veganism disrupts her family and exposes the worst human appetites and impulses . . . a stripped-down, thoughtful narrative . . . about human psychology and physiology.”—Huffington Post

“Adventurous readers will be blown away by Han Kang’s The Vegetarian, in which a once-submissive Korean wife’s compulsion to stop eating meat spirals out of control. This moving story engages complicated questions about desire, guilt, obligation and madness.”—More

“This elegant-yet-twisted horror story is all about power and its relationship with identity. It’s chilling in the best ways, so buckle in and turn down the lights.”—Elle.com

“The Vegetarian is the first—there will be more, let’s hope—of Han Kang’s novels to arrive in the United States. . . . The style is realistic and psychological, and denies us the comfort that might be wrung from a fairy tale or a myth of metamorphosis. We all like to read about girls swapping their fish tails for legs or their unwrinkled arms for branches, but—at the risk of stating the obvious—a person cannot become a potted bit of green foodstuff. That Yeong-hye seems not to know this makes her dangerous, and doomed.”—Harper’s

“This haunting, original tale explores the eros, isolation and outer limits of a gripping metamorphosis that happens in plain sight. . . . Han Kang has written a remarkable novel with universal themes about isolation, obsession, duty and desire.”—Minneapolis Star Tribune

“Complex and strange . . . Han’s prose moves swiftly, riveted on the scene unfolding in a way that makes this story compulsively readable. . . . This is a book that demands you to ask important questions, and its vivid images will be hard to shake. This is a book that will stay with you.”—St. Louis Post-Dispatch

“Brutally yet beautifully explores the gap between one person’s expression and another’s reception.”—Harvard Crimson

“The Vegetarian is incredibly fresh and gripping, due in large part to the unforgettable narrative structure. . . . Han Kang has created a multi-leveled, well-crafted story that does what all great stories do: immediately connects the unique situation within these pages to the often painful experience of living.”—The Rumpus

“A horror story in its depiction of the unknowability of others—of the sudden feeling that you’ve never actually known someone close to you . . . Its three-part structure is brilliant, gradually digging deeper and deeper into darker and darker places; the writing is spare and haunting; but perhaps most memorable is its crushing climax, a phantasmagoric yet emotionally true moment that’s surely one of the year’s most powerful. This is an ingenious, upsetting, and unforgettable novel.”—Publishers Weekly (starred review)

“The book insists on a reader’s attention, with an almost hypnotically serene atmosphere interrupted by surreal images and frighteningly recognizable moments of ordinary despair. Han writes convincingly of the disruptive power of longing and the choice to either embrace or deny it, using details that are nearly fantastical in their strangeness to cut to the heart of the very human experience of discovering that one is no longer content with life as it is. An unusual and mesmerizing novel, gracefully written and deeply disturbing.”—Kirkus Reviews

“Searing . . . [Yeong-hye’s] extreme efforts to separate herself from her animal appetites reveal the sanity and normality of those closest to her to be mere matchstick houses.”—Helen Oyeyemi, author of Boy, Snow, Bird

“A strange, painfully tender exploration of the brutality of desire indulged and the fatality of desire ignored, rendered all the more so by Deborah Smith’s exquisite translation.”—Eimear McBride, Baileys Women’s Prize for Fiction–winning author of A Girl Is a Half-formed Thing

“Visceral and terrifying, The Vegetarian is a startling reminder of the utter unknowability of another’s mind. Nonetheless, reading it, you will feel it in your flesh: the desire for peace, a plea for safety, for escape from your own inevitable mortality. It is artfully plotted yet reads like a fever dream, sweeping and surreal. It will leave you aching.”—Sarah Gerard, author of Binary Star

“Like a small seed, Han Kang’s startling and unforgettable debut goes to work quietly, but insistently. Her prose is so balanced, so elegant and assured, you might overlook the depths of this novel’s darkness—do so at your own peril.”—Colin Winnette, author of Haints Stay and Coyote

“The Vegetarian is a story about metamorphosis, rage, and the desire for another sort of life. It is written in cool, still, poetic but matter-of-fact short sentences, translated luminously by Deborah Smith, who is obviously a genius.”—Deborah Levy, author of The Unloved and Swimming Home

“The Vegetarian is hypnotically strange, sad, beautiful, and compelling. I liked it immensely.”—Nathan Filer, 2013 Costa First Novel Award–winning author of The Shock of the Fall

“A stunning and beautifully haunting novel. It seems in places as if the very words on the page are photosynthesising. I loved this graceful, vivid book.”—Jess Richards, Costa First Novel Award short-listed author of Snake Ropes

“Poetic and beguiling, and translated with tremendous elegance, The Vegetarian exhilarates and disturbs.”—Chloe Aridjis, author of Book of Clouds