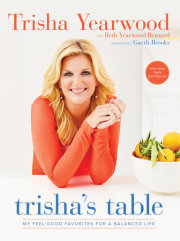 Responding to an increased demand, Trisha shares how she has incorporated healthier cooking into her lifestyle without completely forgoing the indulgences she (and we) loves and craves. TRISHA’S TABLE includes a balance of healthy versions of comfort food along with a smattering of indulgences.

Trisha guides her readers to balance indulgence with intelligence, providing weight-conscious home cooks who can’t deny their cravings for good ol’ comfort food with delicious tweaks for every meal.

Whether slimmed down or “original,” Trisha’s recipes are always delicious. Each of the more than 100 recipes will appeal to Trisha’s huge southern fan base, while her fresh outlook on food and life (and her TV exposure) will also bring a new audience to this book.

TRISHA YEARWOOD is the New York Times bestselling author of Home Cooking with Trisha Yearwood and Georgia Cooking in an Oklahoma Kitchen, and stars in the Emmy Award-winning show Trisha’s Southern Kitchen on Food Network. She has recorded nine #1 songs and twelve albums, has won back-to-back Country Music Association Female Vocalist of the Year, and has three Grammys. Trisha lives with her husband, Garth Brooks, in Nashville, TN.