Now in paperback, THE SUNLIGHT PILGRIMS by Jenni Fagan 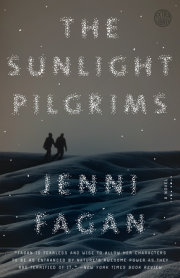 Select Praise for THE SUNLIGHT PILGRIMS
“Fierce and clear-eyed . . . Fagan’s novel balances the oncoming climate disaster with the human-scales stories of these characters, focusing especially on Stella, whose feelings about her sexual identity are refreshingly resolute. . . . Fagan is a poet as well as a novelist, and many of her images of this unbidden winter are shot through with lyric beauty. . . . Strange beauty can be found in destruction, and Fagan is fearless and wise to allow her characters to be as entranced by nature’s awesome power as they are terrified of it.”
—New York Times Book Review (cover review)

“Fagan’s keen ear for crackling dialogue . . . betrays a bittersweet depth. And her imagery is sumptuous. As the cold, slow reality of climate change creeps across the countryside, she delivers page after crystalline page of haunting, heart-stopping lyricism. . . . [Fagan] captures what so much apocalyptic literature loses: the way humans can become mute, withdrawn, and even darkly humorous in the face of doom, rather than running around in panic.”
—NPR.org

“The Sunlight Pilgrims is a story about light and darkness, the essential co-existence of the two, the life-force which drives us on into the light and its transforming power even when everything appears to be stacked against us. It is also about the spectrum of light, the different colors which it produces and the wide range of ways in which we can live. It is a beautiful story which itself illuminates, and perhaps above all it illuminates the importance of respecting difference.”
—Electric Literature

Jenni Fagan’s award-winning debut novel, The Panopticon, was published to remarkable acclaim. It was hailed by the New York Times as “a deeply felt and genuinely affecting novel” and by the Boston Globe as “a classic coming-of-age tale”; the New York Times Book Review said in their cover review, “There is no resisting the tidal rollout of Fagan’s imagery . . . vive Jenni Fagan.”  With THE SUNLIGHT PILGRIMS (Hogarth; July 11, 2017), now available in paperback, Fagan brings her singular voice to a story about a group of misfits, an impending climate disaster, and a search for family that will appeal to readers who loved Emily St. John Mandel’s Station Eleven; Helen Oyeyemi’s Boy, Snow, Bird; and Nell Zink’s Mislaid.

It’s November 2020, and the world is freezing over. Each day is colder than the last. There’s snow in Israel, the Thames is overflowing, and an iceberg separated from the fjords in Norway is expected to drift just off the coast of Scotland. As this deep freeze sets in, Dylan MacRae, reeling from the death of his mother and grandmother and the loss of their family business, an art house cinema, leaves London and heads north to Scotland to bury his mother’s and grandmother’s ashes on the Scottish islands of his ancestors.

Hundreds of miles away, in the Scottish Village of Clachan Fells, twelve-year-old Stella and her survivalist mother, Constance, scrape together a living selling restored “shabby chic” furniture, and live in a caravan park surrounded by a group of kind and eccentric neighbors. Stella, who was a boy named Cael just one year earlier, is struggling to understand her new identity as a transgendered teenager while navigating a world of increasingly hostile school bullies and her mother’s tumultuous romantic life. When Dylan arrives in Clachan Fells, life changes course for all three of them, and as they prepare for a rapidly changing climate, secrets that link them in unexpected ways are revealed.

THE SUNLIGHT PILGRIMS is a striking, heartbreaking, and visionary story of courage and resilience in the face of nature’s most violent hour. Fagan has written a vibrant story about the families we are born into and those we choose, and the courage to persevere and find joy in the most unexpected places.

ABOUT THE AUTHOR: Jenni Fagan was born in Scotland, where she presently resides. She attended the Royal Holloway MFA and is concluding her PhD at The University of Edinburgh. Fagan has been on prize lists for Dublin Impac, Sunday Times Short Story Award, James Tait Black and Desmond Elliott. Fagan was named one of Granta’s Best of Young British Novelists in 2013. The Sunday Herald Culture Awards named her Scottish Author of the Year 2016. Her recent New & Collected poems were included on the list of Best Scottish Poems in 2017. Fagan has just made her debut as a writer/director with a short film. Fagan wrote the screenplay for her debut novel The Panopticon, which is being made by Sixteen Films.