Now in paperback: THE GATEKEEPERS by Chris Whipple

With a new chapter on Trump 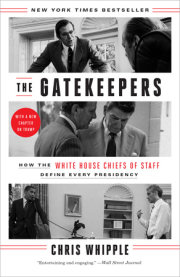 *WITH AN EXCLUSIVE NEW CHAPTER ON THE TRUMP PRESIDENCY, FEATURING INTERVIEWS WITH REINCE PRIEBUS AND STEVE BANNON*

– Two ambitious chiefs, Donald Rumsfeld and Dick Cheney, brought Gerald Ford back from political disaster to the brink of victory over Jimmy Carter—forging a political alliance between themselves that would take them to the pinnacle of power decades later.

– Jimmy Carter tried to govern without a chief, and thereby crippled his presidency.

– James A. Baker III redefined and mastered the job—making the Reagan Revolution possible.

– George W. Bush’s long-serving chief Andrew Card would be unable to quell the infighting among the president’s feuding advisers. As the decision to invade Iraq loomed, no one was acting effectively as the president’s honest broker.

– Barack Obama’s presidency was profoundly affected by his chiefs of staff. With Rahm Emanuel at the helm, Obama succeeded in staving off another Great Depression, saving the auto industry, and passing his landmark Affordable Care Act. And Emanuel’s successors helped achieve the Paris Climate Accord, the Iran Nuclear Agreement, and the diplomatic opening to Cuba. But Obama’s inability to pass legislation, his failure to get a grand bargain on the budget, and the bungled health-care rollout can be attributed not just to political gridlock, but to his chiefs.