From the enlistment lines in Harlem to the training camp at Spartanburg, South Carolina, to the trenches in France, Brooks tells the thrilling story of the heroic journey these men undertook for a chance to fight for America. 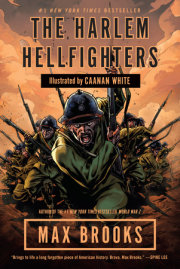 “Shines a literary klieg light on a woefully overlooked chapter of World War I…Bolstering Brooks’s storytelling muscle is the high-contrast black-and-white art of gifted Caanan White, whose graphic grit evokes Joe Kubert and ‘Sgt. Rock’… A powerful comic that may do more than any previous work to illuminate the heroism of the 369th.” —Washington Post

“Stunning… Like the regiment of African American soldiers it depicts, Harlem Hellfighters can’t be stereotyped or pigeon holed. It might not be your typical history book, but it packs one hell of a punch.” —Newsweek

“A splashy, fun, gripping number, and an intriguing look at an oft-ignored footnote in the history books.” —New York Daily News

“Moral complexity is just one of the novel’s many achievements. Dialogue and imagery are often richly juxtaposed… White’s illustrations render the grisly and graphic details of trench warfare with haunting immediacy… The sharp lines and shadowy depths of his sketches are absorbing and Brooks’ words are equally evocative. The dialogue is bleak, funny, and efficient… [Brooks’] careful research doesn’t sap the story of its speed and strength.” —Christian Science Monitor

“An utterly fresh and shocking blend of storytelling and graphic art that takes us back to the global conflagration at the dawn of the last century and the heroic and outsized role brave African American soldiers played in turning the tide for the Allies….White’s illustrations explode off the page and Brooks’s storytelling brings gripping action and anger to every page.”
—Tom Reiss, Pulitzer Prize–winning author of The Black Count

“The Harlem Hellfighters served in combat longer than any other American unit, losing neither men nor ground, even as they fought entrenched racism within the U.S. military. Brooks and White tell a thrilling saga of noble perseverance, individual valor and sacrifice, and collective triumph, showing how combat abroad in war contributed to the larger quest for civil rights at home. Informed by judicious historical research and vividly illustrated storytelling, this book itself is a historical ‘first,’ and is a major contribution to our understanding of Black History.”
—Henry Louis Gates Jr., Alphonse Fletcher University Professor, Harvard University

The Harlem Hellfighters were a highly decorated, barrier-breaking, historic black regiment—one of the first American units to fight in World War I. Despite extraordinary struggles, including rampant racism and insults from their own government (the division was set up for failure with white troops being issued new uniforms and firearms while most African American troops trained with broomsticks), the 369th Infantry became one of the most successful—and least celebrated—regiments of the war. The Harlem Hellfighters, as their enemies named them, spent longer than any other American unit, white or black, in combat and displayed extraordinary valor on the battlefield. In all of their time at war, they never lost a trench to the enemy or a man to capture.

Brooks’s interest in the Hellfighters has spanned nearly three-quarters of his life. He was first introduced to the story at age eleven, by a UCLA student who was working for his parents at the time. Nearly a decade later he finally tackled the story of the Hellfighters, writing a screenplay of their story and pitching it to all the Hollywood networks and studios…who all passed on it. It wasn’t until 2006 when Brooks began collaborating with Avatar Press on a graphic companion to his first book, The Zombie Survival Guide, that he realized he had come across the perfect medium to tell the story of the Harlem Hellfighters—the graphic novel.
From the enlistment lines in Harlem to the training camp at Spartanburg, South Carolina, to the trenches in France, Brooks tells the thrilling story of the heroic journey these men undertook for a chance to fight for America. What the Hellfighters overcame in the midst of racism and war is an astonishing and powerful story that has never been told in this fashion. With pages grittily inked by acclaimed illustrator Caanan White, THE HARLEM HELLFIGHTERS showcases Brooks’s talent for war and historical narrative—and gives his fans a terrific new story to discover.