Pavone offers an elegant and riveting suspense story about secrets, spies, and the devastating power of the truth. 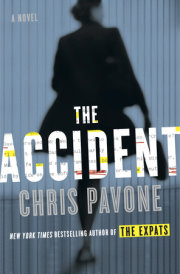 Praise for The Accident

“Mr. Pavone’s savvy novel has plenty of swift action and sudden twists, but some of its most engrossing passages evoke the passion that informs a beleaguered lit-world where story sense is still as important as dolls and cents.” —Wall Street Journal

“A propulsive A-train of a thrill ride and worthy successor to Pavone’s debut. . . . [His] insights into myriad professional and personal betrayals that infuse The Accident with its vibrant core.”—Los Angeles Times

“[Pavone is] a reliable new must-read in the world of thrillers. . . . He just keeps the shocks coming. . . . Pavone lards this book with keen, bittersweet observations about the publishing world, details that become a big, poignant part of its appeal. . . . You will want to finish The Accident at a nice, rapid clip to see how [the] pieces come together. . . . Unputdownable.” —The New York Times

“. . . readers will read this one through the night.” —Booklist (starred review)

“Pavone knows the formula for a best-seller and keeps the reader turning the pages.” —Kirkus  Reviews

“[Pavone] has certainly outdone himself with this amazing thriller that is truly impossible for the reader to put down. . . . Full of constant surprises [and] jam-packed with everything from media moguls to conspiracies. This is a truly great read!” —Suspense magazine

“Chris Pavone’s many fans will not be disappointed with The Accident, his fast-paced, twisting, smart follow-up to The Expats. Cleverly plotted, filled with surprises, a terrific read.” —William Landay, New York Times bestselling author of Defending Jacob

“The world of book publishing has never been more perilous or mesmerizing than in Chris Pavone’s dizzyingly good follow-up to The Expats. The dark eruption of long-buried secrets, complex betrayals further snagged by sex and greed, and eleventh-hour desperate gambits for reinvention all propel a whirlwind story that will keep you up way past your bedtime. Crafty, stylish, satisfying.” —Paula McLain, New York Times bestselling author of The Paris Wife

“Clever, sophisticated, and propulsive. I am constantly awed by Chris Pavone’s writing. He’s already one of the best in the thriller business.” —Joseph Finder, New York Times bestselling author of Paranoia and Suspicion

The editor needs it. The assistant lied about it. The Hollywood producer is desperate for it.
The media mogul would kill for it. The CIA will eliminate anyone who touches it.
The author will die for it. The agent is the one who controls it . . . but only until they find her.

When Chris Pavone’s first novel, The Expats, was published in 2012, it quickly became one of the most talked about debuts of the year. The incredibly intricate and sophisticated narrative received high praise from John Grisham, Olen Steinhauer, and Patricia Cornwell, reviews that drew comparisons to John le Carré and Graham Greene, was optioned for film, sold in 18 countries, debuted on the New York Times bestseller list, won both the Edgar and Anthony Awards for best first novel, and Malcolm Gladwell gushed about it in his closing remarks at the Association of American Publishers annual meeting last year.

Now, in The Accident (Crown Publishers; March 11, 2014), Pavone has done it again. From New York City and Los Angeles to Copenhagen and Zurich, he has penned a masterful thriller that has all the hallmarks that excited booksellers, bloggers, reviewers, and readers with his first novel: the methodical ratcheting up of suspense and high-end elegance that hooked thriller fans and literary readers alike; the wonderfully drawn characters with rich inner lives; the exoticism of Europe; and layers of secrets that plague all involved—not to mention a remarkably twisty ending.

In New York, in the early dawn hours, literary agent Isabel Reed is reading frantically, turning the pages breathlessly. The manuscript—printed out, hand-delivered, and totally anonymous—is full of shocking revelations that could bring down one of the most powerful men in the world, and initiate a tremendous scandal implicating multiple American presidents and CIA directors.  This is what Isabel has been waiting for: a book that will help her move on from a painful past, a book that could reinvigorate her career . . . a book that will change the world.

In Copenhagen, career CIA operative Hayden Gray thinks he has finally located the elusive author and can eradicate the dangerous manuscript, but he finds himself increasingly drawn into an elite circle where politics, media, and business collide. On the one hand, a powerful media mogul who has unlimited resources to get what he wants. On the other, a group of book professionals—an eager assistant, a flailing editor, an ambitious rights director, and a desperate publisher—who all see their personal salvations in this project. And in between, the author himself, hiding in shadowy anonymity in what he hopes is safe, quiet Zurich.

In this tangled web, no one knows who holds all the cards, and the stakes couldn’t be higher: an empire could crumble, careers could be launched or ruined, secrets could be unearthed, and innocent people could—and do—die.

Pavone, who has spent more than two decades in the book publishing world as an acquisitions editor, copy editor, managing editor, and even as a ghostwriter before turning his attention to fiction, returns with a propulsive new thriller that is just as captivating and riveting as his award-winning debut. Layered with tension and populated by exciting new characters, The Accident is gripping, sophisticated, and impossible to put down.

About the Author:
Chris Pavone’s debut novel, The Expats, was a New York Times, USA Today, and international bestseller, and winner of Edgar and Anthony Awards for best first novel. Pavone grew up in Brooklyn, graduated from Cornell, was a book editor for nearly two decades, and has spent time as an expat in Luxembourg. He now lives in New York City with his wife and children.