My Pizza by Jim Lahey with Rick Flaste

The Easy No-Knead Way to Make Spectacular Pizza at Home 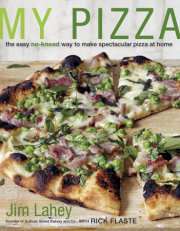 The mastermind behind the foolproof no-knead bread-making technique that was first featured by the New York Times in 2006 (and subsequently e-mailed around the world) now applies his groundbreaking no-knead dough to pizza, with brilliant results. For Lahey, a great pizza starts with a superb crust. The slow fermenting method of his simple dough recipe results in a rich, chewy, crisp crust that chars nicely in any home oven—gas or electric—in about five minutes. Building upon this foundation, Lahey shares his delicious, and sometimes surprising, topping combinations.

MY PIZZA features all of the recipes that have put Co. on the map, including:

With 75 color photographs, MY PIZZA unlocks the secrets of great, easy pizza at home, taking home bread-baking to the next level, and is destined to become an instant classic.

JIM LAHEY studied sculpture before learning the art of bread baking in Italy. In New York City, he opened the Sullivan Street Bakery in 1994 and Co., a pizza restaurant, in 2009. Lahey and his businesses have been featured in Vogue, Bon Appétit, and the New York Times, and he has appeared on the Martha Stewart Show and NBC’s Today show. His innovative no-knead bread recipe, first published in an article by Mark Bittman in the New York Times in 2006, became the basis of Lahey’s cookbook My Bread, which was a Gourmet Cookbook Club selection.

RICK FLASTE, the first editor of the Dining section of the New York Times, has collaborated on several books.