MOTHER, CAN YOU NOT?

Hilarious Essays from the Creator of @CrazyJewishMom 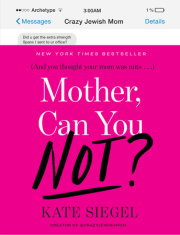 Mother, Can You Not?

Based on the wildly popular Instagram account @CrazyJewishMom, MOTHER, CAN YOU NOT? is Kate Siegel’s hilarious essay collection about life with the woman who redefined the term “helicopter mom.”

There is nothing more wonderful—or more annoying—than a mother’s love. Just ask Kate Siegel. Her own mother drove her so crazy she decided to broadcast their hysterical conversations on Instagram. Soon hundreds of thousands of people were following their daily text exchanges, eager to see what outrageous thing Kate’s mom would do next. Would she send Spanx to Kate’s office? Would she make up a song about kegels to the tune of Ke$ha’s “TiK ToK”? Would she give Kate’s number to a stranger in a coffee shop? (Yes, yes, and OF COURSE. He was a cute lawyer who went to Yale.)

The @CrazyJewishMom account became a viral hit, featured everywhere from People to BuzzFeed, and now has over 800,000 followers. In her new essay collection, MOTHER, CAN YOU NOT? (Crown Archetype; Hardcover; $22.00; On Sale April 5, 2016), Kate shares the laugh-out-loud stories behind the texts, and pays tribute to the woman whose unique brand of no-holds-barred parenting makes for great entertainment. You’ll laugh, you’ll relate, and above all, you’ll be grateful—your mom may be a little nuts, but at least she’s not setting up online dating profiles for you or berating your significant other about “buying the cow.”

But in many ways, Kate’s mom is a typical parent. She loves her daughter and wants her to be happy, have a good job, get married, and have kids someday. Her concerns just happen to manifest themselves in dozens of texts a day, ranging from advice about using bronzing lotion (“Blinded by the light, more like BLINDED BY KATE’S CALVES”) to pleas for Kate to freeze her eggs before it’s too late (“Can you hear it?” “What?” “The sound of ur biological clock.”).

In MOTHER, CAN YOU NOT?, Kate reveals what it’s really like to be on the receiving end of that particular blend of unconditional love, withering sarcasm, and bizarre neuroses. From befriending strippers to stalking college admissions officers, their adventures are not your average mother-daughter exploits. There was the time Kate’s mom stole a cat from the pound, convinced it was the reincarnated spirit of a former pet. Or the morning of Kate’s 20th birthday, when she surprised Kate in her college dorm at 8 a.m.—only to find her daughter in bed with her crush. And that’s just the tip of the hilariously overprotective, delightfully candid iceberg. There’s also the Gay Jersey Shore experiment, the electromagnetic radiation detector phase, the disastrous photo shoot that ended with the hosing down of an aroused homeless man, and many, many more.

Every mother-daughter dynamic is a balancing act. Who else can proudly insist that you’re perfect while simultaneously making you question every career, fashion, and relationship decision you have ever made? With MOTHER, CAN YOU NOT?, Kate invites you to commiserate, to roll your eyes, and above all, to laugh lovingly at the lengths to which our mothers will go to better our lives—even if it feels like they’re ruining them in the process.

Kate Siegel is a writer and the social media guru behind @CrazyJewishMom. She previously served as an associate producer for Condé Nast Entertainment, overseeing all digital video content for Teen Vogue, Bon Appétit, The New Yorker Festival, Condé Nast Traveler, and Self. Prior to joining Condé Nast, Kate studied English, creative writing, and theater at Princeton University.