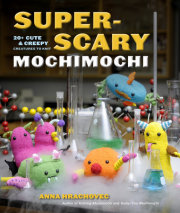 The book also includes all the “gory details” on the materials and techniques used to make the toys, as well as a refresher section covering basic knitting information. These beasties take only a small amount of yarn to create, so they are inexpensive, quick, and portable projects.

Anna proves that nothing is more dangerous than a clever, creative knitter wielding yarn and pointy needles! With this guide in hand, knitters can whip up an army of creatures that will go bump in the night, eat your iPad alive, or might just stare back at you in a deeply unsettling way. This adorable assortment may be more cute than scary, but try not to bruise their egos. These toys think they’re terrifying!

Anna Hrachovec launchedMochimochiLand(mochimochiland.com), a website and brand of knitted toy patterns, in early 2007. In addition to her website, Anna maintains a blog (mochimochiland.com/weblog) and a Flickr group (Mochimochi Land’s Photostream), and a Ravelry group has been founded in honor of her knitted toys (Mochimochi Land Lovers). Her original knitted creations have been exhibited in galleries inNew York,Seattle,San Francisco,Berlin, andTokyo.