Modern love meets its match in a dazzling debut: I TAKE YOU by Eliza Kennedy 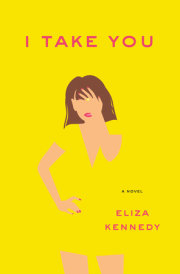 “A salty, lively first novel…The book’s dialogue is crackling, bawdy, and modern, and Lily’s compulsion to step over the line leads to a few memorable scenes.”—New York Times Book Review

“A saucy first novel….I Take You, as salty-sweet as a margarita, will appeal to fans of Seating Arrangements, Where’d You Go, Bernadette, and, looking further back, Laurie Colwin’s Happy All the Time, though it’s far more ribald. Kennedy’s novel, tailored for summer wedding season, is a sassy paean to pleasure and romantic love that may well leave you singing that classic Gershwin line, ‘Better call the calling-off off.’”—NPR.org

“In the first big beach read of the season, New York lawyer and bride-to-be Lily Wilder has a hard time staying faithful to her perfect fiancé—but that won’t stop this hilarious debut novel from winning you over and warming your heart.”—Entertainment Weekly

“A smart and challenging examination of gender politics and the meaning of marriage in the twenty-first century. . . . Compulsively readable.”—Booklist (starred review)

“Kennedy’s debut novel sparkles with candor and wit. . . . [Her] ribald story is both engaging and atypical, the perfect combination for a new voice in women’s fiction.”—Publishers Weekly

“In this whirlwind story, which reads not unlike a quickie engagement, the ultimate question is whether one can be both promiscuous and in love. Lily, basking in the glow of Key West’s free-love attitude, is guided toward yes. This book has the effect of three Bloody Marys at brunch: it’ll leave you flushed, giddy, and prepared to embrace your wild side.”—Kirkus Reviews

“I have not laughed this hard or this much at a book since Bridget Jones’s Diary. I Take You is wickedly smart, hilariously funny, sexy, clever, and stupidly accomplished for a first novel. In short, the most enjoyable read I have had in years. I completely loved it.”—Jane Green, New York Times bestselling author of Tempting Fate

“HAHAHAHAHAHAHAHA! I Take You is the funniest book I’ve read all year. I drank four bottles of chardonnay by myself because I couldn’t get to a book club fast enough. Eliza Kennedy makes infidelity sexy again!”—Gary Shteyngart, New York Times bestselling author of Super Sad True Love Story

“I Take You is sexy and smart in equal measure—Eliza Kennedy’s heroine Lily Wilder is great fun to be around, even if she’s not always sure who she’s taking to bed. Kennedy’s witty and brash voice will win you over by the end of the first page.”—Emma Straub, New York Times bestselling author of The Vacationers

“This fun, warmhearted novel is the rare great read about love and marriage that doesn’t tacitly promote a set of dated ideas about how women should feel, think, and behave. Instead, it romps along merrily while being subtly revolutionary about sexual politics—no small feat, as anyone who’s tried to romp merrily while revolting can attest.”—Emily Gould, author of Friendship: A Novel

Meet Lily Wilder: New Yorker, lawyer, and Manhattan’s most inappropriate bride-to-be. Lily loves men, a lot, and has no business getting married. But when she meets archaeologist Will—funny, good-looking, and the nicest guy she’s ever dated—and he asks her to marry him, she can’t resist saying yes. Now she’s counting down the days until her wedding while simultaneously prepping a witness who just happens to be vacationing in the Florida Keys, where she’s planning to tie the knot. As the wedding approaches, Lily’s nights—and mornings, and afternoons—of booze, laughter, and questionable decisions become a growing reminder that the happiest day of her life might turn out to be her worst mistake yet. After all, not everyone thinks Lily is marriage material (including, at times, Lily herself). Her bevy of stepmothers and hellish mother-in-law have plenty to say about her plan to become a Mrs. But, with drink in hand and the help of her best friend, Freddy, Lily plans to defy them all and make it to the altar on her own terms.

Brilliantly executed and driven by the irrepressible voice of its unforgettable heroine, I TAKE YOU (Crown; May 5, 2015), Eliza Kennedy’s page-turning debut, showcases one of the most engaging commercial voices since Helen Fielding’s Bridget Jones. Kennedy, who attended the University of Iowa and Harvard Law School, where she was an editor at the Harvard Law Review, clerked for a federal judge and practiced litigation at a prestigious Manhattan law firm for several years before she turned to writing. With no formal training, she’s managed to pen one of the most compulsively readable, laugh-out-loud novels you’re bound to read all year. While Kennedy insists she is nothing like her saucy protagonist, she does know a thing or two about wedding disasters. Much like the nuptials at the heart of her debut, her own wedding to writer Joshua Ferris in Key West was a bit of a debacle: there was a tropical storm menacing the coast of Florida, her maid of honor missed her flight and showed up moments before the ceremony, one of their readers was hospitalized with chest pains, and a drunken family member tried to assault the DJ (she is now an ex–family member).

I TAKE YOU is edgy, smart, and wickedly entertaining, but it is more than just a sexy romp. Through Lily’s experiences, Kennedy teases out larger questions, such as the nature of choice, gender politics, the implications of desire, the insidiousness of cultural expectations, and the pursuit of the most undervalued idea of all:pure fun.

ABOUT THE AUTHOR: ELIZA KENNEDY attended the University of Iowa and Harvard Law School, where she was an editor of the Harvard Law Review. After graduation she served as a law clerk for a federal judge, then practiced litigation for several years at a prestigious Manhattan law firm. She lives in New York with her husband and son. I Take You is her first novel.