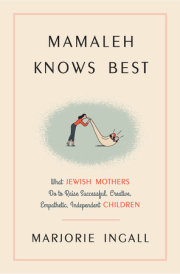 “What’s the difference between a Jewish mother and a Rottweiler? A Rottweiler eventually lets go.”

You are likely familiar with the age-old stereotype of the Jewish mother: she’s a demanding, overbearing, monstrously narcissistic, guilt-mongering hovercraft. But Tablet Magazine columnist Marjorie Ingall argues that this archetype, while entertaining, isn’t based in reality. In her new book, MAMALEH KNOWS BEST: What Jewish Mothers Do to Raise Successful, Creative, Empathetic, Independent Children (Harmony Books; Hardcover; $25.00; On Sale August 30, 2016), Ingall puts the archaic stereotype to bed, cuts through the mishegas, and teaches parents of all faiths (or none) a thing or ten on how to raise a decent human.

Ingall grew up Conservative, attended an Orthodox day school, and married a Reform Jew. She admits to having been a know-it-all and troublemaker as a kid, but credits her Jewish roots in becoming a successful parent. In MAMALEH KNOWS BEST, she contends that contrary to popular belief, Jewish parenting methods are actually in line with modern

research on fostering children’s creativity, kindness, and intellect. Which, she points out, is a good reason why Jews constitute over 20 percent of Nobel Prize winners, 21 percent of Ivy League students, 26 percent of Kennedy Center honorees, and 37 percent of Academy Award–winning directors—despite making up less than 1 percent of the world’s population.

The ultimate “how to make a mensch” guide, MAMALEH KNOWS BEST offers ten amusing chapters that incorporate personal anecdotes, historical texts, and research from today’s leading parenting experts. Ingall starts by debunking the stereotype of the Jewish mother, and then shares Jewish secrets for raising self-sufficient, ethical, kind, and accomplished children. She infuses her advice with humor and chutzpah, offering abundant examples of how Jewish mothers—rather than smothering their children to death—have successfully nurtured their independence, fostered discipline, and stressed the importance of education and a sense of humor. She also argues in favor of instilling a healthy distrust of authority and encourages kids to embrace their own geekiness. Among her many nuggets of wisdom: