Sikka’s powerful new book is a definitive and approachable guide to life during, and after, breast cancer 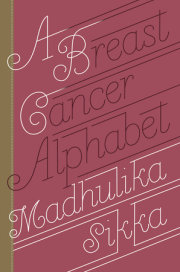 “Breast cancer patients will fall in love with Sikka . . . a funny, chatty, and honest storyteller. Just what the doctor ordered.”

“[Sikka’s] charming alphabetic compilation . . . is a warm and fuzzy friend to keep close during the cancer journey.”

“Sometimes humorous, always honest and straightforward, this little book offers the perfect combination of practical advice and personal musings to help any woman, her family and her friends handle the complicated road through Cancerland.”

“This useful and often amusing little book should be the first present you give someone who’s been diagnosed with breast cancer. Its practicality extends from sound advice (‘drugs are your friends’) to the inclusion of pages for notes at the end. By presenting her own experience in a wry and matter-of-fact manner, Madhulika Sikka removes taboos in talking about sex, or looks, or the desire on some days to just quit soldiering on through the whole deal. It won’t make having breast cancer easier but it will make the dread disease and its treatments less mysterious. That’s a gift indeed.”

—Cokie Roberts, journalist and author of We Are Our Mothers’ Daughters

“Thank goodness for Madhulika Sikka! She is neither a warrior nor a hero. Her breast cancer made her neither sexy nor spiritually enlightened. She is simply a real woman with a real illness who tells it true: with grief, anger, wit, and great authenticity.”

—Peggy Orenstein, author of Cinderella Ate My Daughter: Dispatches from the Front Lines of the New Girlie-Girl Culture

“A Breast Cancer Alphabet is a brisk, user-friendly ABC of dealing with the disaster of cancer and how to get through it with a smile. It is a remarkably insightful and sensitive guide to making the best of the worst, all delivered with Madhulika’s wit and vital energy.”

“Madhulika Sikka is the honest-talking-advice-giving-big-sister-sage-support-group that every girl needs to help navigate the world of ‘cancerland.’ A Breast Cancer Alphabet is the definitive how-to go-to book.”

“Madhulika Sikka’s A Breast Cancer Alphabet is brilliantly researched, smart, and personal—an unvarnished primer of what every woman needs to know about the diagnosis, treatment, and consequences of living with breast cancer. Her practical advice  from A to Z is exactly what I wish I’d known when I was first diagnosed. With the trained eye and ear of a top-flight journalist, she demystifies the disease, telling you everything you forgot to ask that no one else will share. Reading it will help you recognize, and even laugh, at your worst fears. B is for Brava, Madhulika—for your honesty and creativity in guiding us on a journey none of us chose to take. It is a lot easier when you have A Breast Cancer Alphabet at your side.”

“Breast cancer is a topic no woman wants to learn about firsthand. But should it happen to you, Madhulika Sikka’s A Breast Cancer Alphabet is an ideal primer for before, during, and after the experience. Offering the kind of real-world advice that can only come from someone who’s lived to tell the tale, Sikka’s book is required reading for anyone in search of a book that will bring you up to speed quickly, gently, and with genuine empathy.”

“‘T should be ‘Thank you, Madhulika,’ for writing a witty, practical, and honest book. Too many cancer books out there gloss over the uncomfortable realities of living with a life-threatening illness. A Breast Cancer Alphabet is a must-have for women with cancer.”

Being a woman is the biggest risk factor for breast cancer. One in eight women in America will be diagnosed during their lifetime. Most breast cancer literature is filled with moving narratives of survival and trustworthy guides. But no other book written about the experience of having, or surviving, breast cancer is quite like award-winning broadcast journalist Madhulika Sikka’s A BREAST CANCER ALPHABET (Crown; February 25, 2014). In it Madhulika offers a new way to live with and plan past the hardest diagnosis that most women will ever receive: it’s a personal, practical, and deeply informative look at the road from diagnosis to treatment and beyond.

As Executive Editor for NPR News, Madhulika oversees coverage that is listened to by twenty-six million people weekly. Three years ago, she was diagnosed with breast cancer. At that time she did what so many of the 250,000 women in America diagnosed with breast cancer every year do—she gathered a council of advisors, starting with but not limited to doctors, to help her strategize about what to do next. But once those conversations were exhausted, she still felt she was in need of something. She found there were no books on the market that spoke with honesty and, frankly, a bit of attitude to women, which is why she ultimately decided to write A BREAST CANCER ALPHABET. At first motivated to counter the empty platitudes of national breast cancer awareness month, Madhulika discovered that she had so much to say to other women going through this, both as a working mother, but also just as a woman. And because any book literally exhausted Madhulika (cognitively, physically, psychically) during treatment she had an elegant solution to this problem—write a pithy, witty, challenging, and deeply informative book and organize it around the alphabet.

A BREAST CANCER ALPHABET is an A-to-Z guide to living with breast cancer. Each of the twenty-six letters of the alphabet have been beautifully rendered with illustrations by Roberto de Vicq de Cumptich. Madhulika uses the simplicity of the alphabet as a starting point to get at some of the thorniest questions that face women in treatment for a serious illness—Sex, really? Why don’t I look better? Am I working hard enough? Am I doing enough for my family? In easy-to-follow, memorable essays she maps the path from breast cancer neophyte to seasoned veteran, navigating for readers the rocky shoals between expert and sisterly advice. As a prominent news executive, Madhulika had access to the most cutting-edge data on the disease’s reach and impact. At the same time, she craved the community of frank talk and personal insight that we rely on in life’s toughest moments. This wonderfully inventive book bridges the worlds of science and story, bringing readers into Madhulika’s mind and experience in a way that demystifies breast cancer and offers new perspective for those living with it.

There is so much that you can’t know when you get sick, but you can seek out a book to teach you how to treat yourself a little better, how to get more out of your own downtime, and also how to understand disease on an emotional and a practical level. A BREAST CANCER ALPHABET is a book to be given and treasured by loved ones and friends diagnosed with, undergoing treatment for, and surviving breast cancer as well as their caregivers, and medical professionals.

ABOUT THE AUTHOR: MADHULIKA SIKKA is executive editor for NPR News and a veteran broadcast journalist, previously at ABC News’s Nightline with Ted Koppel, CBS News in Tokyo, and NBC in London. She has won every major broadcast news award, including four Emmys, an Edward R. Murrow Award, two Dupont Awards, a Peabody, and awards from the National Association of Black Journalists and the South Asian Journalists Association.