The Lost Kitchen: Recipes and a Good Life Found in Freedom, Maine 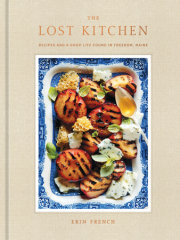 “This charming, tremendously personal book speaks so beautifully of the remote and glorious land it comes from, and is packed with wonderful ‘perfectly imperfect’ tales of life, cooking, and the love of place. Erin French’s passion is contagious and her simple but nuanced and detailed ingredient-focused cooking captivating. Think Wood-Smoked Leg of Lamb with Garlic Scape & Mint Pesto, Fried Green Tomatoes with Buttermilk & Chives, and Sweet Parsnip Cake with Hazelnuts & Mascarpone—oh, my!”

“Long before I got to the very tempting recipes in The Lost Kitchen, I was hooked by Erin French’s charming storytelling. Home cooks will enjoy the warm tone in which Erin has written her recipes. They are a breeze to follow, call for only a handful of mostly easy-to-find ingredients, and reveal the good life of the four seasons in Maine.”

“One of the most magical experiences of my life was eating at Erin French’s Lost Kitchen, a magnificent restaurant-in-a-mill in Freedom, Maine. The food was deeply personal, local, and delicious. I am filled with joy at the prospect of re-creating some of the dishes at home from the recipes in this gorgeous cookbook.”

“At first I thought this was simply a gorgeous restaurant book full of the food I love to eat, but now I think Erin French has done something more magical than that; hers is that luscious, dim restaurant you go to in your dreams, the one that feeds you in every sense of the word. Her food isn’t just beautiful—although it is—it also contains emotions, moods, and a lot of love for her Maine roots.”

With its heartwarming backstory, approachable and comforting recipes, and stunning visuals, The Lost Kitchen: Recipes and a Good Life Found in Freedom, Maine (Clarkson Potter; $32.50; on sale May 9, 2017) by Erin French is something special.

Erin French grew up in Freedom, Maine (population 719), helping her father at the griddle in his diner. An entirely self-taught cook who read cookbooks to form her culinary education, she now helms her acclaimed restaurant, The Lost Kitchen, in a historic 1834 mill in the same town, creating meals that draw locals and visitors from around the world to a dining room that feels like an extension of her home kitchen. Each spring, the day the phone line opens to accept reservations, the restaurant books up for the entire year.

No one can bring small-town America to life better than a native, especially when it comes to Maine, one of the country’s most off-the-beaten-path states, with an abundant natural bounty that comes from its coastline, rivers, farms, fields, and woods—a cook’s dream. Inspired by her lush locale and classic American cooking, Erin makes food that has been called “brilliant in its simplicity and honesty” by Food & Wine, and it is exactly this pure approach that makes her style of cooking so appealing—and so easy to embrace at home, wherever you live.

Highlight recipes from The Lost Kitchen include:

ERIN FRENCH turned a string of early catering gigs into a secret suppers series in her apartment. She took her dinners on the road, organizing traveling “fork-to-field” dinners from a tricked-out 1965 Airstream trailer, before returning to her tiny hometown, Freedom, Maine, to build her dream restaurant, The Lost Kitchen, in a restored 1834 gristmill. Each spring, the day the phone line opens to accept reservations, the restaurant books up for the entire year. This is her first book.