Life Between Heaven and Earth 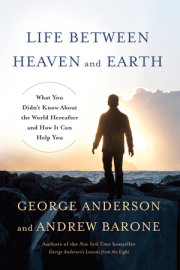 Life Between Heaven and Earth

New York Times bestselling author and internationally acclaimed medium, George Anderson, has dedicated nearly fifty years working as a liaison between heaven and earth through his ability to communicate messages of hope from those who have passed on. Since the age of six, Anderson has had a special relationship with what he calls “the souls” who depend on his ability to hear them and bring peace and comfort to their grieving loved ones. Yet, Anderson, who paved the way for many of today’s popular mediums with his pioneering work in the 1990’s, is consistently reminded by those who have passed that our preconceived notions of this life and the next aren’t always as they seem. Sometimes we need our beliefs challenged in order to find resolution in this life and the next.

In his new book, LIFE BETWEEN HEAVEN AND EARTH: What You Didn’t Know About the World Hereafter and How It Can Help You (Harmony Books, on-sale 6/21/16), Anderson and his co-author, Andrew Barone, present nine personal case studies told by the families of those who have passed and the souls themselves, to show that heaven isn’t just an idea but an ever-changing reality.

LIFE BETWEEN HEAVEN AND EARTH is a thought-provoking read that provides a provocative perspective on what lies beyond our physical reality. Each chapter is told by both the families of those who have died and the souls themselves in session with Anderson, revealing the truth about what life is actually like on the other side and the sometimes difficult transitions in getting there. Some of the stories and lessons learned include:

Anderson and Barone provide amazing insights into how the world hereafter addresses some of the most unusual issues that arise in life and death. The stories found in LIFE BETWEEN HEAVEN AND EARTH offer hope and comfort to those suffering from the loss of a loved one. No matter how complicated the circumstance of one’s death, resolution, peace and, acceptance can be found in amazing and unique ways.

GEORGE ANDERSON is the first medium in history to appear regularly on a cable television show, the first medium to gain international exposure for his extraordinary ability, and the only medium to be cleared by network television standards and practices to appear on the first-ever prime-time special on mediumship, Contact: Talking to the Dead. He is the only living medium to have been invited to Holland by surviving members of the family of Anne Frank, and he remains the most scientifically tested medium on earth. Anderson has been featured in newspapers and on television and is the New York Times bestselling author of George Anderson’s Lessons from the Light and the national bestseller Walking in the Garden of Souls.

ANDREW BARONE died suddenly on May 17, 2016, at the age of fifty-five. He was the executive director of the George Anderson Grief Support Programs and a cofounder of the Foundation of Hope, an organization that helps bring the comfort and solace of bereavement programs into the communities across the United States and around the world. A former classical pianist, he dedicated his skills and life experiences to helping others gain a better understanding of matters related to loss and dying, and to furthering the acceptance of mediumship as a bona fide grief therapy. He is the coauthor of the New York Times bestseller George Anderson’s Lessons from the Light and the national bestseller Walking in the Garden of Souls.