Law of the Jungle by Paul Barrett – NOW AVAILABLE IN PAPERBACK 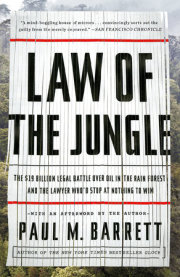 Law of the Jungle

Select Praise for Law of the Jungle:

“Impressively evenhanded . . . [Barrett] calls Texaco to account of dirty drilling, and holds Petroecuador, which maintained such practices for years, to the same standard. He . . . thinks Mr. Donziger made a ‘deal with the Devil,’ noting that the attorney even opposed the Ecuadorian government’s own environmental cleanup plan in order to preserve his lawsuit.” —The Economist

“Paul Barrett’s Law of the Jungle is a cautionary tale—a deeply reported, well-written reminder that to be credible and effective, the fight against environmental misconduct must be waged within the rule of law. Our legal system can be a powerful force for environmental progress, but its rules have to be respected.” —Fred Krupp, president, Environmental Defense Fund

“Law of the Jungle is a riveting piece of storytelling. The environmental insults make you furious, and your heart breaks for the people whose ways of life are violated—but what happens after that challenges your beliefs about fairness and justice. This isn’t a simple David and Goliath story; it’s an engaging passion play that unfolds from the Ecuadorian jungles to the courtrooms of New York.” —David Yarnold, president and CEO, National Audubon Society

“This chilling account of the bruising, bare-knuckle conflict between a deeply flawed do-gooder and a well-oiled legal steamrolling machine should give pause to anyone who believes that justice always prevails. Barrett brilliantly shows that in the real world, the law of the jungle—an oxymoron if there ever was one—trumps the rule of law.” —Alan Dershowitz, professor, Harvard Law School and author of Taking the Stand: My Life in the Law

In his bestselling book Glock: The Rise of America’s Gun(Crown, 2012), which was widely covered in the national media (NPR, CBS’s Sunday Morning, New York Times, USA Today, Wall Street Journal), author and journalist Paul M. Barrett wove together fifteen years of research and interviews to tell the story of how an obscure Austrian curtain rod manufacturer who spoke barely any English stormed the American gun market, and in the space of a few years, made his handgun an American icon. In LAW OF THE JUNGLE: The $19 Billion Legal Battle Over Oil in the Rain Forest and the Lawyer Who’d Stop at Nothing to Win (Broadway Books; on sale September 22, 2015), now out in paperback with a new afterword and optioned for film by Brad Pitt’s Plan B production company, Barrett returns with the gripping story of one man’s obsession with righting the wrongs perpetrated by a major U.S. oil company accused of polluting the Amazon rain forest in Ecuador over a thirty-year period, destroying the lives of local farmers and indigenous tribe members.

Steven Donziger, former journalist and self-styled social activist, is a Harvard-educated lawyer who was a classmate and friend of Barack Obama. He first signed on to the budding class-action lawsuit against oil giant Texaco (later Chevron) in 1993to seek reparations for Ecuadorian farmers and Indians whose lives were disrupted by decades of oil drilling and production in their communities. The massive environmental damage resulted in entire villages losing not only their land but their livelihoods. Water supplies were contaminated, roads were sprayed with waste petroleum, and many people suffered rashes, stomach ailments, and even death.

In the face of legal setbacks and a fierce defense by Chevron, Donziger emerged as the lead plaintiffs’ lawyer in the case, even though he had no prior civil courtroom experience. A charismatic, larger-than-life showman, he became a master at manipulating the media and doing combat in the court ofpublic opinion. During twenty years of hostilities that played out in courts in Manhattan, Quito, and the jungle oil town of Lago Agrio, Donziger and Chevron employed tactics that would be considered unethical or worse by any American judge. Donziger took this no-holds-barred struggle to greater depths, however, and outmaneuvered his more powerful opponent. In 2011, his civil action resulted in a $19 billion judgment against Chevron, the largest environmental award in history. Then the oil company began to fight back, and Donziger’s relentless quest for billions of dollars for his clients—and an enormous payday for himself—proved his undoing. Back in the United States, a fresh legion of Chevron private eyes and attorneys revealed Donziger’s ends-justify-the-means methods. The company filed a racketeering suit against him, alleging that his years of shady legal moves, fabricated evidence, and media pressure amounted to an illegal shakedown of Chevron. Donziger may have set out to seek justice, but after years of wooing celebrities such as Bianca Jagger, Sting, Trudie Styler, Brad Pitt, and Angelina Jolie, he succumbed to self-destructive hubris. His case unraveled.

Barrett, who attended college and law school at Harvard, has covered the Chevron case for years and wrote a cover story about it for Bloomberg Businessweek. His reporting has taken him to Quito, the rain forest, and the San Ramon, California, headquarters of Chevron. He has interviewed all of the key players in this story, including Donziger and his backers as well as Donziger’s latest lawyer Deepak Gupta; top Ecuadorian officials; Chevron executives, lawyers, and oil field workers; and tribal leaders and poverty-stricken peasants. He saw firsthand the extent to which oil production in the jungle has both fueled economic development in Ecuador and ruined a large swath of the rain forest.

LAW OF THE JUNGLE isn’t a simple story of villains and heroes, and as Barrett’s afterword shows, the Ecuadorian oil pollution debacle shows no sign of abating. Donziger, who faced a March 4, 2014, U.S. civil verdict finding him liable as a racketeer, portrayed himself as the champion of the “little people,” the foe of a powerful and evil oil giant. Undermining the David-versus-Goliath narrative, however, he crossed far over the line in seeking to vindicate his clients.In the end, rain forest residents—victimized by the oil industry, the Ecuadorian government, and their own lawyer—may never see any compensation. Donziger betrayed the Ecuadorians he sought to protect and set a dangerous precedent that will inhibit other attempts to use the courts to hold corporations accountable. With LAW OF THE JUNGLE Barrett has written an engrossing account of greed and brash ambition.

ABOUT THE AUTHOR:Paul M. Barrett is an assistant managing editor and senior writer at Bloomberg Businessweek. He is the author of the New York Times bestseller Glock: The Rise of America’s Gun, American Islam: The Struggle for the Soul of a Religion, and The Good Black: A True Story of Race in America. He lives and works in New York City.