The Last Palace by Norm Eisen

Europe’s Turbulent Century in Five Lives and One Legendary House 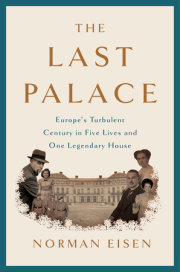 From celebrated American diplomat and democracy advocate Norman Eisen comes THE LAST PALACE, a sweeping historical narrative of Europe’s turbulent century as told through the lens of what John Updike called “the last palace built in Europe” and the lives of the people who called it home.

“At a time when we find ourselves newly nostalgic for courageous public officials and American leadership on behalf of human rights, Eisen has written a pearl of a book. THE LAST PALACE is a great read and a stirring reminder of the importance of decency in public life.”

“Not only a first-rate work of history, but a call to action written at a time of urgent need.”

“Engrossing… This action-packed yet lyrically written page-turner confers a fascinating human understanding of Europe’s past and present.”

When Norman Eisen moved into the U.S. ambassador’s residence in Prague in 2011, he was startled to discover a swastika affixed to the underside of a table in his new home. These symbols of Nazi Germany turned out to be hidden throughout the house—remnants of the residence’s forgotten history. Eisen, the son of a Czech Holocaust survivor, wondered what the palace walls had seen over the past hundred years. That thought led him to write THE LAST PALACE: Europe’s Turbulent Century in Five Lives and One Legendary House (on sale September 4), which traces Europe’s modern trajectory and, through intimate character portraits of the people who lived in the house, draws out the recurring struggle of democracy against Communism, Fascism, and today’s forms of illiberalism.

If Eisen’s name is familiar, it may be as President Obama’s “Ethics Czar”—a moniker given to him by the press when he served as White House special counsel from 2009 to 2011. Or perhaps it is from one of his many New York Times op-eds about fighting for the future of American democracy. He is also a CNN political commentator, senior fellow at the Brookings Institution, and chair of the government watchdog group CREW (Citizens for Responsibility and Ethics in Washington), which he cofounded in 2003. Eisen served as the U.S. ambassador to the Czech Republic from 2011 to 2014—where he lived in the book’s titular palace, famous among diplomats for its beauty.

With exclusive access to previously unexplored historical archives (including hundreds of secret State Department documents declassified for this book), Eisen details the twisting, captivating tale of the remarkable people who called the palace home. First there was the optimistic Jewish financial baron Otto Petschek, who built the palace after World War I as a statement of his faith in European democracy and his place in it. That faith was shattered, and anti-Semitism forced the Petschek family to flee, just one step ahead of the Nazis who were moving in. The next palace resident was Wehrmacht general Rudolf Toussaint, a cultured, compromised German who served Hitler in World War II and ultimately put his life on the line to save the house and Prague itself from destruction. The war ended and soon the palace became the residence of U.S. ambassador Laurence Steinhardt, who succeeded in wresting the palace from Communist hands but failed to block Soviet domination of Czechoslovakia. Forty years later, Shirley Temple Black, the iconic former child star, took up residence in the palace as the ambassador. Black, an eyewitness to the crushing of the 1968 Prague Spring by Soviet tanks, had been determined to become a diplomat and to return to help end totalitarianism—and in 1989 did just that.

Woven through this era-spanning narrative is the story of Eisen’s own mother, Frieda. Born in a Czechoslovak village just as construction began on the palace, she may have been the poorest Czech Jew, and Otto Petschek the richest. She was shocked when the Petscheks fled and, like most of the country’s Jews, she remained behind—trapped in her small town. While Toussaint occupied the palace, Frieda and her family were shoved onto cattle cars that would transport them to Auschwitz. After the war, she returned to find her home in ruins and her family dead. More than a half century later, Frieda was afraid when her son returned to the country where she had suffered so much. Her concerns seemed only specters of the past to Eisen, but he soon found that the past was very much alive in Europe—and she became his best adviser as he confronted its dark legacy.

THE LAST PALACE is a cautionary tale. The dark forces that agitated the lives of each of the characters—triggering three global wars—are emerging again. Hypernationalism, populism, attacks on refugees, anti-Semitism, and other eerily familiar currents course through Europe—and the United States. But the book also offers a message of hope:  How democracy has triumphed before and can do so again.

About the Author: Norman Eisen is a CNN political commentator, a senior fellow at the Brookings Institution, and board chair of Citizens for Responsibility and Ethics in Washington (CREW). He writes regularly for the New York Times, Washington Post, USA Today, and Politico. He is an attorney who previously served as White House special counsel for ethics and government reform and later as U.S. ambassador to the Czech Republic. THE LAST PALACE is his first book.