THE LAST GIRL by Nadia Murad

My Story of Captivity, and My Fight Against the Islamic State 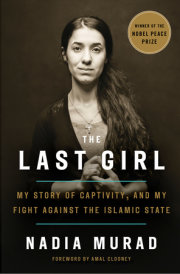 “I want to be the last girl in the world with a story like mine.”

—Nadia Murad, in THE LAST GIRL

“A devastating yet ultimately inspiring memoir that doubles as an urgent call to action.”

A survivor of the Islamic State–led genocide of the Yazidi people, Nadia Murad has captured the world’s attention with her devastatingly powerful story and unparalleled bravery. A nominee for the Nobel Peace Prize, recipient of the Václav Havel Human Rights Prize and the Sakharov Prize, and the UN’s first Goodwill Ambassador for the Dignity of Survivors of Human Trafficking, Nadia’s advocacy as a human rights activist has given a face and voice to the thousands who have suffered unspeakable crimes carried out by the Islamic State.

On November 7, Tim Duggan Books will publish Nadia’s memoir, THE LAST GIRL: My Story of Captivity, and My Fight Against the Islamic State. The foreword will be written by renowned barrister Amal Clooney, who is serving as Nadia’s counsel in an effort to prosecute the Islamic State for their crimes.

“Being a survivor of genocide comes with great responsibility—for I am the lucky one,” Nadia says. “Having lost many family members and friends, it is a responsibility I embrace fully and take very seriously. My role as an activist is not just about my suffering—it is about a collective suffering.” THE LAST GIRL is a continuation of Nadia’s mission to share her heartbreaking personal tragedy with the world in the hope of stopping the Islamic State and holding them accountable for their crimes.

Nadia grew up with her mother, brothers, and sisters in Kocho, a small village in northern Iraq populated by farmers and shepherds. While poor, the village was tight-knit and safe, the residents proud that from afar, Kocho “glowed in the darkness.” A member of the Yazidi people, an ancient religious minority in the region that recently had known relative peace living alongside their Muslim neighbors, Nadia aspired to be a history teacher or salon owner, and though life was hard in Kocho, she never wanted to live anywhere else. To her and many others in the village, the stories they heard of firmans—massacres of the Yazidi people—were a thing of the past.

In August 2014, twenty-one-year-old Nadia’s entire world was shattered when fighters operating under the banner of the Islamic State descended upon the village. To the Islamic State, the Yazidis were kuffar—unbelievers worthy of killing—and an easy target. After nearly two terrifying weeks under siege, trapped in their homes, about 1,200 villagers were ordered by the fighters to a school where the men were separated from the women. Nadia watched as ISIS soldiers loaded the men onto trucks and drove them away from the school, having said they would bring them to nearby Mount Sinjar, a high, narrow mountain that has sheltered generations of Yazidi. Instead, gunfire was soon heard, as hundreds of men who had refused to convert to Islam, including six of Nadia’s brothers, were executed. The women were then separated by age, with Nadia and the younger girls designated to be sold as sabaya, or sex slaves. The older women, Nadia’s mother among them, were killed. Nadia was one of hundreds of women and children taken captive from her town, with several thousand more Yazidis kidnapped or murdered in the surrounding areas in what the United Nations has since classified as genocide.

Nadia was taken to Mosul, where she was held captive by a succession of militants and repeatedly raped and beaten. At every turn she was reminded that she was just property, there to be touched and abused. “All of those violations were steps in the execution of our souls,” Nadia writes. Forcing her to renounce her religion by citing the shahada—the simple Islamic prayer that demonstrates a convert’s commitment to Islam—in front of a judge while standing at the side of her new ISIS “husband” was, Nadia writes, “the cruelest” violation.

After several horrific days, Nadia managed a harrowing escape through the ISIS-held streets of Mosul. She walked the streets for hours, her identity cloaked by the abaya (robe) and niqab (veil) her captors made her wear. With night falling, and no reason to think that anyone would be sympathetic to helping her, she steeled her resolve and knocked on a door. In a stroke of sheer luck, she’d stopped at the home of a Sunni Muslim family willing to risk their lives by having their eldest son smuggle her to safety. In THE LAST GIRL, Nadia shares for the first time the details of her perilous escape to Kurdistan, which included passing through a checkpoint displaying her picture as a runaway, driving over a bridge laden with IEDs, and living in fear of being pulled over by ISIS militants at any moment.

Nadia ultimately made her way to a refugee camp, and then Germany, where she now lives, and has since told her story to thousands of people—politicians and diplomats, filmmakers and journalists, and countless ordinary people. “I think there was a reason God helped me escape, . . . and I don’t take my freedom for granted,” Nadia writes. “The terrorists didn’t think that Yazidi girls would be able to leave them, or that we would have the courage to tell the world every detail of what they did to us. We defy them by not letting their crimes go unanswered. Every time I tell my story, I feel that I am taking some power away from the terrorists.”

While Kocho was recently taken back from the Islamic State, allowing Nadia to return for the first time in three years to the village that was once her home, much work remains in her mission to bring the Islamic State to court. “In captivity, I vowed that if I were released I would testify against [the Islamic State] and bring them to justice,” Nadia said. “Although the militants continue to threaten me with death, I am determined to bring them to the International Criminal Court on charges of genocide. I used to pray for my own future, and the futures of my siblings and my mother. Now I pray for the survival of my religion and my people.”

THE LAST GIRL is a call to action, a testament to the human will to survive, and a love letter to a lost country, a fragile community, and a family torn apart by war.