A LADDER TO THE SKY by John Boyne 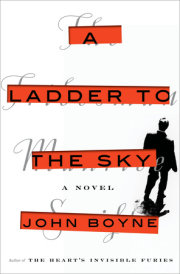 A Ladder to the Sky

“Boyne’s fast-paced, white-knuckle plot, accompanied by delightfully sardonic commentary on the ego, insecurities, and pitfalls of those involved in the literary world, makes for a truly engrossing experience.”
—Publishers Weekly (starred review)

“Boyne expertly explores notions of originality and authorship through multiple first-person accounts of the despicable Swift. As a result, his latest novel is absorbing, horrifying, and recommended.”

“An all-consuming ambition to be a successful writer drives a young man down unusual paths to literary acclaim in this compelling character study . . . Boyne’s singular villain and well-sustained tension merit a good audience.”

“Well-crafted. . . . The novel unfolds in an extremely layered manner, but what Swift’s story slowly reveals says much about publishing, pride, deceit, and plagiarism—and worse, much worse.”
—Booklist

“A Ladder to the Sky is clever, chilling and beautifully paced; a study of inner corrosion that Patricia Highsmith herself could not have done better . . . wickedly astute.”
—The Times (London)

“Maurice Swift is a literary Tom Ripley . . . a first-class page turner.”
—The Guardian

“A deliciously dark tale of ambition, seduction and literary theft. . . powerful and intensely unsettling . . . in Maurice Swift, Boyne has given us an unforgettable protagonist, dangerous and irresistible in equal measure. The result is an ingeniously conceived novel that confirms Boyne as one of the most assured writers of his generation.”
—The Observer

“Maurice Swift, as cold and manipulative a character as you’re likely to meet this year . . . the story takes an ever darkening series of twists and turns . . . John Boyne is a master storyteller . . . this chilling and darkly comic tale of unrelenting ambition.”
—Express

Internationally acclaimed novelist John Boyne is back—this time with an unputdownable, literary psychodrama that will delight, surprise, and terrify readers: A LADDER TO THE SKY (November 13, 2018; Hogarth).

As he did with the beloved, marvelously entertaining, and heartfelt The Heart’s Invisible Furies, John Boyne lays bare the life and times of one man. This time, the man is a classic antagonist whose single-minded pursuit of fame and glory brings forth gasps of amazement and shivers of fear.

Maurice Swift is handsome, charming, and hungry for fame. The one thing he doesn’t have is talent—but he’s not about to let that stand in his way. Working as a waiter in a West Berlin hotel in 1988, Maurice finds the lucky opportunity to learn from the truly talented: a chance encounter with celebrated novelist Erich Ackermann. He quickly ingratiates himself with the powerful—but desperately lonely—older man, who bestows on Maurice the slightly nebulous role of personal assistant.

Once firmly embedded in Erich’s world, Maurice takes advantage of Erich’s literary contacts and graciously offered guidance, while working to tease out of Erich a terrible, long-held secret about his activities during the war. Taking to heart Erich’s advice that he pay attention to “other people’s stories,” Maurice finds the perfect inspiration for his first novel—consequences be damned.

Now that Maurice has had a taste of literary fame, he knows he can stop at nothing in pursuit of that high. He matches wits with Gore Vidal on the Amalfi Coast on a trip with author Dash Hardy, the latest writer Maurice has latched onto. Once Dash serves his purposes, Maurice moves onto Edith, a fellow author whose success from her critically and commercially acclaimed first novel soon eclipses his. Never mind that fact that Edith is his wife—Maurice’s career has stalled, so he puts all considerations of Edith aside and takes drastic measures to revitalize his career.

Years later, Maurice is raising his son in Manhattan, where he has launched Stori, literary magazine. He holds sole power over who and what gets published, which has the potential to launch careers. More important to Maurice, it guarantees a constant stream of submissions for him to screen for stories worthy of appropriating as his own.

Maurice continuously hones his talent for deceit and manipulation, preying on the talented and vulnerable in his cold-blooded climb to the top. He expertly leverages his beauty and charm against his unsuspecting victims. But the higher he climbs, the farther he has to fall . . .

Structured cleverly around the stories of Maurice’s victims, A Ladder to the Sky only reveals Maurice’s perspective in the final section—and it does not disappoint. Devilishly entertaining, A Ladder to the Sky is a fascinating portrait of a relentlessly corrupt man, a playful exploration of artistic ownership, and a brilliant take on the dark side of creative ambition, from one of the most talented storytellers working today.

About the author: JOHN BOYNE was born in Ireland in 1971. He is the author of eleven novels for adults, five for younger readers and a collection of short stories. His 2006 novel, The Boy in the Striped Pajamas, sold 9 million copies worldwide and has been adapted for film, theater, ballet, and opera. John has won three Irish Book Awards and many other international literary awards, and his novels are published in over fifty languages. He lives in Dublin.

MORE PRAISE FOR A LADDER TO THE SKY

“Skillfully constructed, and above all, compulsively entertaining. . . . The finest novel of the year.”
—The Irish Examiner

“As a study in the self-rationalizing ‘ethics’ of a psychopath, this book is fascinating. As a story, it is horrifically plausible.”
—The Sunday Independent

“A riot of a read. . . . An author at the top of his game who knows exactly what he wants to say.”
—The Sunday Times (London)

“A highly enjoyable romp that lifts the lid on authorial vanity and jealousy and an intelligent take on cultural appropriation.”
—Monocle

“Boyne delivers a perfect balance of pace and detail to keep you gripped throughout.”
—i Newspaper